I had always leaned toward blues-flavored rock.

Even non-bluesy groups like The Beatles, in the early days I liked them best when they did songs like "Money" and "Slow Down." But my songwriting always leaned in the folksy or folk-rock 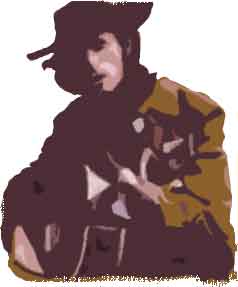 Maybe Someday was written in 1971 or '72, and it was one of the first times I managed to make a blues statement in my writing. But I don't have the knack of speaking in the very simple language of the blues (She took all my money and ran off with the milkman.), as much as I would love to. As a result, a few big words and complex concepts have crept into this and most of my songs, and I don't know if I've ever gotten them under control or expressed them clearly.

It was this song, however, that was the first time I tried just to say plain and direct things that I actually felt, instead of writning about things that I kind of thought songs should be written about. I was starting to integrate my songwriting with my real self. I still haven't finished that project, but I believe more than ever that I have to keep working on it.

I have performed this song hundreds of times, solo and with with numerous bands, on two continents. It has been recorded a few times. This version was done in the home studio, with me playing and singing all the parts and also acting as the engineer and producer. The home studio is PC-based, and I hadn't used it for a year or two, so I had forgotten how everything worked. I chose Maybe Someday as a practice song.

TECHNICAL NOTES: I played the main rhythm guitar on my Gibson ES-355. To stay in time I used a MIDI drum track, just a simple one-bar loop. The lead guitar was played on my 70's-era Stratocaster, and the slide was on the 355. The bass is a Kramer bass that I borrowed from my old friend Tom Ham. Eventually I resequenced the MIDI drums to make them sound like they were part of the "band": fills, breaks, lead-ins, etc. All the percussion was done with audio loops. All the lead and background singing is me, recorded with my one microphone, an Oktava MK-219 condenser.

We get drunk in the morning, blind in the afternoon
You're trting to stay hidden from me and I'm hiding from you
Maybe some day when we've both been  while away
We can make it -- maybe someday

But it's a stone cold romance: Long, long, long lonely nights
You know we're just wasting time until we find  way
We've both been standing in line to say "Maybe someday"

Talk to me now in the cold red light of the moon
Wake me, make me, take me along with you
Come for me now, crying out loud in my face
Eloquent, vulgar, screaming all over the place

We get rushed in the morning and distant on the night before
Everywhere, all the time, edging over toward the door
Maybe some day when we've both been a while away
We can make it -- maybe some day