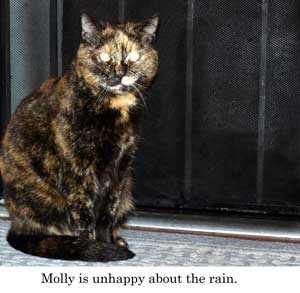 Normally the rain hits hardest in the mountainous regions to the north and east of L.A. In the old days, before we “improved” the drainage, the water just ran off, down through the gullies and streams from the mountains, right through the city to the ocean, bringing with it lots of mud. The two biggest streams came to be known as The Los Angeles River and The San Gabriel River, although they were often dry for years at a time. This system had been working pretty well for centuries, a long time in a town where you’re old at 29 and the Nielsens come out every morning.

But today the rivers are mostly paved aquaducts. Realizing that Nature had screwed up, the various municipalities that make up greater Los Angeles have been pouring concrete in these ditches for the past fifty years, until now they are very efficient transporters of water. Now when it rains in L.A., these rivers become raging 30-mile long torrents of angry, boiling, muddy water, filled with rocks, trees, cars and occasionally people. The water careens down through the basin at thirty miles an hour and ten feet deep. The pavement ensures that nothing is absorbed into the ground, so as the river flows along it gains more and more depth and power.

I haven’t turned on the television news since I got home from work this evening, but I am willing to bet right now that at least one local station will feature a story on someone who has fallen into the river and has to be rescued. It happens every time it rains. Some nincompoop will climb over the fence and get close to the edge. Since it’s all paved now, when the nincompoop slips, there are no branches to grab onto, no uneven ground to slow his fall. He is going into the drink, and fast, and then he is going wherever the river wants to go, because nobody is strong enough to fight such current.

They will have a helicopter shot of the river, and they will pan the camera around and every now and then we’ll get a glimpse of the asshole flailing in the dark water. Then we’ll see the 50 or so firefighters, cops and paramedics on the shore, with their assortment of vehicles and lifesaving equipment. If the guy has found something in the water to grab onto, like an abandoned car, the lifesavers will be throwing ropes to him. If he’s free floating they will be running ahead to the next bridge, from whence they will try to grab him as he floats by. Of course what we all hope for — this is the most exciting — is that they will drop a rescuer down from a chopper to grab the guy and pull him to safety. Or maybe we hope they’ll drop him and he’ll disappear forever. I’m not sure.

If I watched TV at work I could have seen this live, with running commentary from local TV announcers who are warm and dry in the studio, as well as from the reporter in the helicopter and the occasional telephone interview with some fire captain. But there will always be a recap on the 11 O’Clock News, in case I missed it, which I did.