The delay we must all now undergo as we wait a couple of months for the Trump Administration to get itself organized and finally take office is actually MORE suspenseful than the run-up to Election Day.

We knew what to expect from President Hillary. It would have been a simple matter of finding out whom she would appoint to carry out the expected policies. But throughout the campaign Trump’s many random and contradictory pronouncements and promises have muddied the water so thoroughly that no one is quite sure what he’s really going to do. 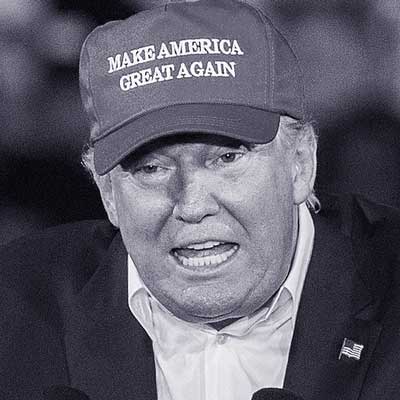 I admit to a high level of apprehension about this — as I have written elsewhere, Donald Trump campaigned as a fascist, and 50 million people voted him into office. Forgive me if I now wake up screaming occasionally, from dreams of jackboots kicking in my front door. But one thing I have discovered is that if you step back from believing imaginary things that haven’t happened yet and study the situation as it really is, it is possible to start breathing normally again, and even to see a way to live with our new political reality. It doesn’t look like it will be a fun time, but it looks like we’ll survive it.

For one thing, I expect that being the (totally) out party will bring the left together – the moderates, the center-left, the really left and even a few of the radical left. We know what we want for the nation, for the world, for each other: freedom, civil rights, human rights, education, peace in the world, a healthy planet, a decent life. Lofty goals, and hard to achieve. We’ll need to pull together if we’re to have a chance of getting there. Losing all three branches of the federal government and a whole bunch of state governments ain’t a picnic, but it should focus our thinking in his regard. We must respect our institutions, but we must engage the opposition, and for the good of us all we must never surrender.

A thought that’s haunted me in the days following Trump’s victory is that those who voted for him must, to some degree, agree with him. Without going through the whole litany of regressive, unconstitutional, violent or ridiculous proposals he has made, can we stipulate that this is pretty scary? (If you really need a reminder, here you go.)

But I no longer think his supporters are all racist nationalists. Certainly some of them must be, and many of them are willing to tolerate that rhetoric and behavior, but here’s another possible explanation for why anybody might vote for someone as abhorrent as Donald Trump: They don’t take him literally.

They never did. They don’t expect him to do all the things he has “promised” to do as president. This doesn’t mean they wouldn’t like him to do some of them: jail Hillary Clinton, ban Muslims, round up all the undocumenteds and ship ’em back. They want those things, but they’ll settle for just getting their jobs back. They don’t know what happened to those jobs, but they know that politicians so far have not seemed willing or able to bring them back, and so they voted for a non-politician. Not only will he get those jobs back for them, because he is a self-made highly successful businessman, but as a twofer he will go to Washington, kick over the tables and piss on the floor. That will teach those effete politically correct career hacks a lesson they won’t soon forget!

In other words, they thought they were “sending a message” to the Washington Establishment. They just didn’t think it through, to the succeeding four years of a Trump administration. This is both dispiriting and encouraging. Dispiriting because how could that many voters be that ignorant and short-sighted?? Encouraging because maybe — just maybe –when I look at the faces in a crowd at the mall I won’t necessarily have to think “Half of these people are violent xenophobic racists.”

Don’t get me wrong. The prospect of a Trump presidency is still profoundly frightening and depressing. I know there is no school for presidents, no place where you can learn the job in advance. Except for a short period after the election and before the inauguration, when you are briefed for the first time on challenges no one but the president ever has to deal with, you learn on the job, period. But as President Obama has said, this particular student is uniquely unqualified for the job. He has zero experience in government, he seems to have a narcissistic personality disorder, a short fuse and the attention span of a child.

How can he manage the most powerful nation in the world?