I just found out my guiltiest of television pleasures, “Californication,” was picked up for a sixth season by Showtime.

This is a show with no redeeming social value, and I have watched every episode. David Duchovny plays burned-out, philandering fuckup Hank Moody, who also happens to be one of the great writers of the 21st century, a combination Beaudelaire, Bukowski and Oscar Wilde. Despite his gift, Hank is singularly unproductive, preferring drinking, smoking, fucking everything in skirts, getting in bar fights and mocking whomever he thinks might be trying to get him to write something, i.e., “sell out.” 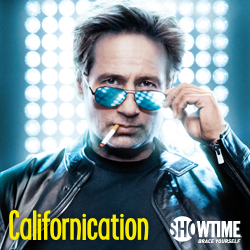 Luckily for Hank, he is a certifiable chick magnet, the perfect poster boy for the adage that women love bad boys. He is so bad he constantly hurts himself and everyone he comes in contact with. Unluckily for Hank (depending on how you look at it) he is also a husband and the father of a young daughter, Becca, the only female he treats with respect, although he torments and disappoints her all the time, simply by being Hank Moody.

The conceit is that Hank is truly a good guy, just misunderstood. In flashbacks we see that he dearly loves his wife Karen (the delicious Natascha McElhone) and daughter, that he is a genuinely talentedÂ artistÂ with great insight into the human condition and a lot to offer the world. He just sees the ugly side of everything too clearly. Nothing in this world is good enough for him, and so he is on a more or less permanent binge of drinking, taking whatever drugs come his way, bedding all the women in Los Angeles, and poking sharp sticks into the eyes of everyone in the publishing and movie business who wants to help him.

Here is what the show is like: At a party at the home of a some big shot who might want to fund a movie based on one of Hank’s novels, Hank stumbles — drunk — into a darkened bedroom, where he performsÂ cunnilingusÂ on a woman he thinks is his wife, but who is actually his hosts wife. Then he gets sick, pulls a valuable painting off the wall and vomits on it just as his host and real wife walk in and turn the lights on. I’m paraphrasing, because that scene happened a few seasons back. In the season six opener, which I just watched today, Hank can’t find the bathroom, so he pees into his unfinished bottle of whiskey. Then, realizing there is no more whiskey in the house, he proceeds to drink what’s in the bottle. The whole thing is several notches below fart jokes.

The supporting cast is made up of perverts, predators, con men (and women), venal business associates, nymphomaniacs, addicts,Â narcissistic rappers and rock stars, in a Fellini-esque parade of weirdness that just keeps coming. Hank makes only bad decisions and gets beat up, arrested, drunk and cursed by all.

Each episode attempts to salvage a little sensitivity, usually at the end in a brief tender moment with Hank and Karen, or Hank and Becca, in which we see the “real” Hank, who only wants to get backÂ withÂ his wife (the only realistic thing in the series is that Karen has dumped him — although she does want him back) and be a good father to Becca. But we know even as we watch these endings, there will be no redemption for Hank.

So why do I watch? Hey, some guys like Batman, because he fights for justice and truth. I like Hank Moody, because he gets away with his bad, bad behavior, and the hottest babes in California keep coming on to him.