Is everybody ready for the “Iranian threat?” 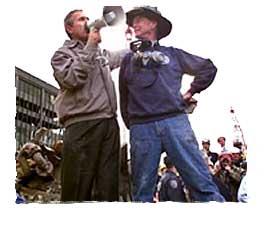 The Republicans are getting indicted right and left, and voters are disgusted with their corruption. The Bush Administration has been exposed over and over again as incompetent, from their bumbling Iraq war “strategy” to their inept response to Hurricane Katrina. Republican members of congress up for reelection are running for the hills, the White House staff is getting the hell out of town and President Bush, who claims he pays no attention to opinion polls, surely must be aware that opinion polls are saying that two out of three people have a very low opinion of his performance in office, even as regards his only strong suit, blasting the living daylights out of other countries. What’s a committed right-wing Christian fundamentalist neocon puppet president to do?

How about scaring the pants off everyone in the country with another imaginary threat from a middle eastern country?

That’s right, folks, THE IRANIANS ARE COMING, and they’ll keep on coming until the elections in November. Rove, Cheney and Bush know that most Americans do not agree with their radical right-wing agenda, but one thing we can all agree on: We don’t want any third-world Islamist countries waggling their nucular programs in our faces. Next thing you know they will have The Bomb and we all know they’re evil enough to use it. We might have to act preemptively, because we don’t want our wakeup call to be in the shape of a mushroom cloud, do we?

I know if you’re reading this that you won’t be fooled by such crap. It was not true in Iraq, and it’s not true now. The Administration’s own experts admit that Iran is at least five years away from getting an atomic bomb. But it’s your responsibility not to let your friends, family and neighbors fall for it, either. Talk to them and make sure they understand what a load of bullsh*t this is, and how it has no purpose but to scare us into voting Republican again. Remind them of how all the justifications for attacking Iraq turned out to be phony, and ask them if they’re ready to believe the same wacky stories from the same people a second time in three years. Would they want to pay — with their money, their descendants’ money and the lives of their children — for the staggering cost of a new war with Iran? Suggest that Iran is not much of a threat, and certainly if our government has any brains or any diplomatic skills at all they ought to be able to negotiate something with Iran in five freakin’ years. Point out the quagmire that Bush’s Iraq adventure has turned into and ask what the benefits have been. Three dollar gasoline? How would they like to pay ten dollars? The president of Iran thinks oil prices, which are reaching new record levels every day now, are too low.

In short, can we just agree that the Republicans have screwed up and screwed us, and can we stay focused on the important task of getting them away from the rudder as soon as the polls open this November? We can be patriotic without being pro-Bush. We can be safe without being psychotically paranoid.

The Rove-Cheney-Bush Administration has got nothing left but fear and hatred. Get ready for the Iranian threat, a constant flow of hints, warnings, leaks, posturings and public statements calculated to make you think that Iran will be lobbing nuclear warheads at you by Christmas.

And don’t believe a word of it.