Clearly I have waited too long to post again. 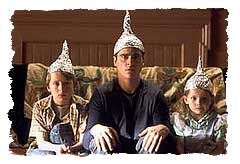 If you doubt this, go back and read the last comment on the previous post, posted by someone called “Enlightenment.” I published my post way back on the 15th of this month, so Enlightenment sure took his/her sweet time to get here. Go ahead and read it. I’ll wait. I think I’ll get some coffee. It will take you that long. Because it’s really long, maybe the longest comment ever on revision99.

Back already? Did you read the whole thing? OK, you don’t really have to read the whole thing. You can get the idea after four or five sentences. For you non-readers, let me summarize: The attacks of September 11, 2001 on New York City and Washington, D.C. were not the work of Islamist terrorists, but rather some combination of United States government, military and (possibly) commercial interests, and the evidence for this is so blatantly obvious that we must all be stupid or blind not to see it.

Frankly, I don’t know how to respond to this. I wouldn’t want to brush the whole tirade off as nonsense. I haven’t trusted the government or politicians in general for decades, so it’s not like these ideas don’t have a bit of traction with me. But what the hell? My instinct is simple: The suggested conspiracy is too complicated, and would have to involve too many people. Certainly “they” could pull off a bombing or a few hijackings, but nobody could keep it secret for five minutes, let alone five years. With hundreds of people involved in the plot, it’s inevitable that somebody would go for his fifteen minutes of fame and spill the inside scoop to Bob Novak, or Bob Woodward, or Bob Scheer, or maybe Bob Seger, and then there it would be, plastered all over the Washington Post, or maybe featured in a song.

In any case, whether the Bush administration was involved in the attacks a lot or a little, or even if they were completely taken by surprise. it’s for sure that there will be no serious look into Enlightenment’s claims until they are out of office, at which point it will have been seven and a half years since the events, and the trail will be pretty cold. Maybe some facts can be uncovered at that time, maybe not. But since I am trying to turn over a new leaf on revision99, and get away from grumbling about politics for a while (not that there’s anything wrong with that), I am biting my virtual tongue and choking back an angry rant, and I’m proud of myself. I hope you are proud of me, too.

I will leave this discussion to you Precious Few, and to you Enlightenment. What happened to us on September 11, who did it, and what – if anything -Â is being covered up?

PS: Food for thought along these lines is available aplenty at Loose Change.