Today the Supreme Court, which is in no way controlled by large corporate interests or appointed by those who are in the pockets of Big Oil, finally ruled on the Exxon Valdez class action suit, a case that has been going on now for nearly 20 years.

They decided that Exxon should pay just 10% of the original damage judgment. 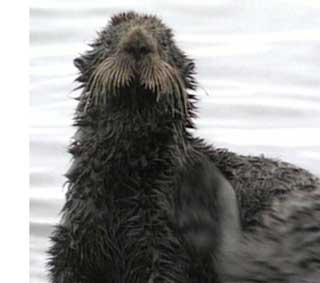 You remember the Exxon Valdez – a few minutes after midnight on March 24, 1989, the supertanker crashed into a reef in Prince William Sound, Alaska, and dumped 11 million gallons of crude oil into the water, which then washed up on the shore in an incident that has been described as “…a severe environmental insult to a relatively pristine, ecologically important area that was home to many species of wildlife endangered elsewhere.” The ship’s captain was not at the helm, but in his quarters sleeping off a night of heavy drinking. The incident was characterized at the time as the worst environmental disaster of all time. The cleanup lasted a few months. The litigation didn’t end until today.

The first damage award against Exxon, in 1994, was 5 billion dollars. Exxon appealed, of course, and the various courts involved over the years have reduced it bit by bit until the Supremes got hold of it. They decided that 500 million dollars, or 90% less than the original award, would be fine.

This is an amount approximately equal to six hours worth of Exxon revenue, so obviously the 19 years of denying responsibility paid off for them. It’s amazing how useful the Supreme Court of the United States can be when the President works for you.

Not so fortunate are the 32,000 people who lived along the 1200 miles of coastline that was damaged by the spill, some say forever. According to them, the spill has never been fully cleaned up. They say a lot of the wildlife, killed or driven away by the toxic mess, haven’t returned. The full amount of the original judgment wouldn’t have compensated them adequately for what they suffered. This latest reduction is simply the final humiliation for them.

Legal scholars may be scratching their heads trying to figure out the Court’s reasoning here, but, hey, what’s done is done. Fish, birds, plankton, fishermen: You lost! Get over it! Tomorrow, the Court is expected to rule that the 2nd Amendment to the U.S. Constitution is meant to permit all of us to own guns. All of us, not just those darned “well-regulated militias.”

Yeehaw! Once we’re all armed, we’ll be able to assess our own punitive damages in the future.