In the 1960’s the Black Panthers upset the California political establishment by showing up at the state legislature armed to the teeth.

They didn’t shoot anybody. It was political theater designed to illustrate their point of view that “power comes out of the barrel of a gun.” Indeed.

It’s probably true that if you and I are in a serious dispute, and one of us has a loaded gun and seems willing to use it, that’s the one with the power, and the one most likely to “win” the argument.

But in the current national conversation (or screaming match) about improving our sick national health care system, logic, compassion, morality and the will of the people are no match for the weapon wielded by the medical-industrial complex: 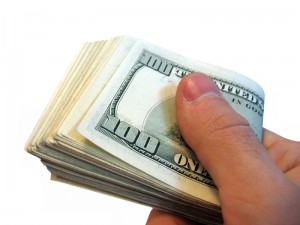 Big pharma and the insurance companies have a lot of it, and they are throwing massive amounts of it into their effort to stop anything that might reduce their obscene profits. It’s working pretty well, as one liberal/progressive/Democratic proposal after another is removed from the discussion.

At the outset the one simple idea that is most likely to reduce cost, cover everyone and free us all from the indentured servitude of employer-provided insurance — universal government-run single-payer (or “Medicare for all”) — was simply taken “off the table,” with no discussion or debate whatsoever.

The Obama Administration fell back to advocating a “public option” plan, which would allow people to choose between their existing plan (if they even had one) and a public plan. The public plan would have been similar to Medicare, and would have operated without having to make a profit, which means it would have been less expensive by a wide margin. This was decried as a “government takeover” and is now not likely to make it into the final version of whatever reform bill is passed.

Next comes the notion of “insurance co-ops.” This is the worst idea so far, because co-ops are sort of ad hoc groups of consumers who band together and try to provide each other health insurance. They will not be able to compete against existing Big Insurance because it will take decades for them to get the membership necessary (an estimated 500,000) to spread the risk widely enough. In the meantime they will be snuffed out by the established industry.

And anyway, Republicans and Blue Dog Democrats in Congress are already saying they won’t vote for co-ops, either.

Here’s what I think, and I’m pretty sure I’m right: The corporations who stand to lose in any major reform of the health care system are simply paying to keep it from happening. They are able to legally bribe elected officials in the form of campaign contributions. And they are hiring media and PR consultants to confuse and frighten the electorate into demanding that the government “keep hands off my Medicare!” With their billions in cash they are able to control the debate from inception to the final vote in Congress. They don’t need guns. Their wealth is their power, and I am starting to wonder if there is any defense.

I mean, according to early polling Americans wanted universal single-payer health insurance by a margin of two to one. Now after a year of misinformation and specious arguments everyone is mixed up and angry and doubtful and suspicious, and if that’s not enough to turn the tide against reform, our elected officials have been given a a few hundred million dollars by the very industries they are expected to regulate, so how the hell do we expect them to behave?

Recommended reading (these guys say it so much better than I):