So I guess Bush is insane. 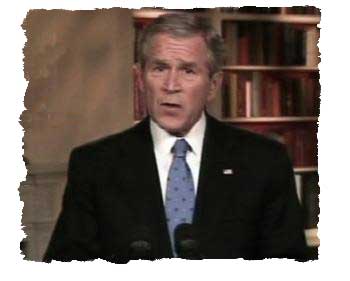 After a month-long buildup during which he gave us to believe that he was figuring out a “way forward,” and against a backdrop of clear voter disgust at his performance in office, particularly his “management” of the war he started in Iraq, he goes on TV and gives us, in the words of one PBS commentator, “…stay the course plus 20,000.”

His speech indicates that he is not going to let reality or the will of the people interfere with his vision, and I mean that in the sense of “hallucination.”

For good measure, he threw in a threat to Iran and Syria. If he attacks one or both of them, or provokes them to attack us, he could be inciting a regional holocaust in the Middle East which would dwarf the mess he has created in Iraq. If anyone survives, it may be called World War III.

I am now afraid for the planet.

Congress must clamp down hard on the Commander-in-Chief. Oversight of the Executive is their Constitutional duty. Impeachment won’t work. It would take too long, and anyway, Vice President Cheney would likely continue the administration’s failed policies. Congress needs to babysit Bush until his term runs out. They must make him ask for money whenever he needs more, and explain publicly exactly what he intends to do with it.

Democrats and Republicans:Â Do you need any more evidence?Â It’s time to get together and save the world.