If you are a Democrat or a progressive independent voter, or a liberal of any kind, it’s time to ask yourself what that means. 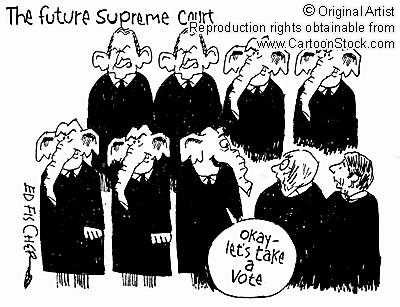 Barack Obama won the Mississippi primary today, and there will be a six week break before the next primary, a big one: Pennsylvania. Please, may Clinton and Obama cool their campaign rhetoric, especially the slurs and smears, for a while. This sniping is really getting to me, and I suspect many other voters feel the same.

The Dems are reinvigorated this season, and passions are running high. We had — what? — eight well-qualified candidates going in to this election. And a Republican party in disarray and obviously clueless as to how to run the country. How could we lose? I don’t think there’s been so much energy on the Democratic side since 1972, when George McGovern cranked up his populist anti-war campaign. All the young people woke up from their love-ins in surprise to find an old fart actually speaking the truth! You had to be there, but trust me: it was thrilling.

The passion looks different this time. I have talked to a lot of voters who are saying if their guy (or gal) doesn’t win the nomination, they are going to stay home on election day in November. Or vote for McCain. They are so powerfully invested in Obama or Clinton that if they don’t get their way, they are going to do something to give us President McCain, which will be sort of like another term of President Bush.

Naturally, no one person can actually accomplish this, and my data is admittedly anecdotal, but come on, people! I’m shocked how often I am hearing this kind of talk, and how vehemently these feelings are expressed, and how incredibly horrible it would be if enough of us carried out these threats and the Democrats failed to retake the White House this year. I don’t want anyone reading this to be offended — I don’t mean this as a personal insult, but I cannot stress enough the importance of getting a forward-thinking President in office AS SOON AS POSSIBLE.

Think about it. Presidents, congresspeople and senators can be voted out of office if they are doing stuff the voters don’t approve of. The justices are appointed for life. The court is currently teetering on the 5-4 brink of going all the way to Right-Wing World, which could have disastrous effects on reproductive rights, civil rights, freedom from religion and the balance of power in the federal government.

For most of you reading this, understand: The next President will have one, maybe two, maybe even three Supreme Court appointments. The Court can either be rebalanced through the appointment of moderate legal scholars or packed with “strict constructionists” who will always vote with the right-wing religious fundamentalists, and they will be there your whole life.

We stayed home in 2000. We said we didn’t like either candidate. Al Gore just wasn’t exciting enough. Some even said that both parties and both candidates were sides of the same coin, not enough difference to even think about. As a result we now have Chief Justice Roberts and Justice Alito. Do you really want to take your ball and go home this November, and let McCain get the opportunity to appoint a few young, ultraconservative justices?

This is too important to mess around with. Clinton and Obama are both light years better than McCain. Either of them will be a breath of fresh air after the past eight years. They can’t both win the nomination, and they will not be on the ticket together (get over that). Even if you have come to hate your candidate’s rival, I urge you to bite the bullet and support the eventual nominee.

Please, there is too much at stake to do anything else.