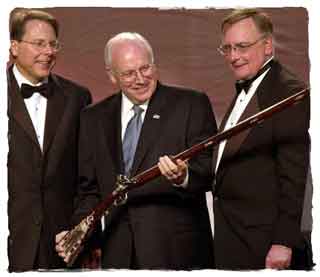 That’s right, the Vice President sprayed a fellow quail hunter yesterday with shotgun pellets at a range of thirty yards. The shot hit Harry Whittington in the face, neck and chest, and he’s in the ICU at a hospital in Texas.

For some reason, the Vice President’s office didn’t announce this when it happened on Saturday morning, and in fact didn’t bring it up publicly for a whole day – after the shooting was reported on the web site of the local paper. They say they wanted to wait until Katharine Armstrong, the owner of the ranch where this took place had a chance to make the announcement herself, but of course I think otherwise.

I think Cheney has finally gone over the Rambo wall and is sending a message to Scooter Libby, Joe Wilson, Mike Brown(ie) and any other chickenshit “whistleblowers” that may be out there: “I might be the Number Two man in D.C., but I’m the baddest Dick in America and if you fuck with me I’m goan take you down.”

Nobody really knows how many heart attacks the guy has actually had. He may not have that long to live, and he may want to take a few scaredy-cat, anti-American, fetus-killing tax-and-spend liberals with him. Of course, the guy he shot is a millionaire Texas Republican lawyer, but I’m just sayin’ “watch your back.”

Can you imagine what poor Karl Rove is going through right now? I sure wish I could have been there when he got this news.

It must be hectic to spin all this stuff every day so that it looks like it was exactly what they had planned and that it really is a good thing for America and Freedom. Now this.

“Cheney did what!? Was it self defense? Please tell me it was self defense. Can we say it was self defense? I want every doctor in Texas at that guy’s bedside, and no photographers. Oh, shit, what’s his face look like? Never mind, I don’t want to know. OK look. Here’s our story. The guy circled around – he might have been drinking – and he came up behind Cheney – no, he snuck up behind. He didn’t follow hunter’s protocol, he didn’t announce himself, it was his own fault. Get him to make a statement to that effect. It was his own fault.

“And God damn it, I don’t want to see pictures in the Times of Cheney laughing and holding up a bloody quail by the feet.”

UPDATE, WEDNESDAY, FEB. 15, 2006: OK, it was funny for a minute, even though we all knew the joke was on poor Harry Whittington. But the party’s over, and I am ashamed of myself for making light of it. Whittington is in much worse condition than I knew. Some of the shot has worked it’s way inside, near his heart, and he’s had a heart attack and been returned to intensive care, where they intend to keep him for another week.

Cheney did not go public with this story for somewhere between 18 and 22 hours. The White House is acting like they didn’t have the full story for that long. Plus, they have been trying to make like Whittington himself is to blame for not “announcing his presence.” This is bullshit, of course.

Why the long delay? Is it because Cheney was drunk? Where is the police report? Or is this just another example of Cheney and the rest of his arrogant gang withholding information from the public, simply because they can?

Every hunter will tell you that the shooter is always the one responsible. When you fire, you have to know where everyone is. If you shoot someone, it’s your fault, end of story. At the very least, the Vice President should grow some balls, stand up, admit he made a stupid mistake and apologize to Whittington and his family publicly.

This is a case of criminal negligence. Fat chance there will be any prosecution, but at least Cheney should be man enough to take the blame. He will finally break his silence on television today at 6 PM Eastern time.

Surprise: He has chosen Fox News as the venue.

6 Replies to “Message in a Cartridge”