I watched her acceptance speech at the Republican National Convention this evening, and she is a snide, snickering, smart-aleck, not at all the sharp, ambitious stateswoman the McCain campaign has been portraying the past few days. 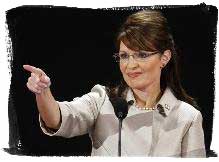 I can’t recall a more mean-spirited speech during this convention or the Democratic one last week.Â There were so many low blows and so little actual content that it doesn’t require a rebuttal so much as a warning from the referee. This will definitely cost her a point or two with the judges.

Oh, sure, the speech was popular there in the convention hall. I think some of the attendees were starting to feel the Rapture. There was a whole lotta shakin’ goin’ on in Saint Paul, but Americans won’t be buying what she is selling, which seems to be mockery, smirking and smears.

The good news for the Democrats is this: Until tonight, there was concern that in the Vice Presidential debate, Joe Biden would necessarily have to go easy on her, because she has little real knowledge of world and national affairs, and she’s just a cute former beauty queen who’s gotten in over her head, and by forcing him to pull his punches in this way she could fight him to a draw and come out more or less unscathed. After her vicious attacks tonight, she can forget about anybody going easy on her. No doubt she will try to turn on the damsel-in-distress act when she faces Joe’s big guns, but I nonetheless predict Joe will shred her, and it will be no more than she deserves.

UPDATE: For a better analysis, read this from The Nation.
UPDATE 2: For more insight, read Roger Simon’s apology to Sarah.
Share this: