I’ll make this really short because by now even I am sick of my political rants. 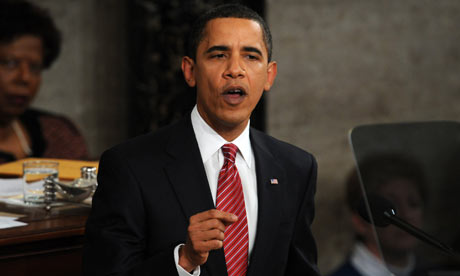 I saw Obama’s pseudo State of the Union speech tonight, as, I imagine so did most of the world. It was quite the event, with the whole Supreme Court there (including Ruth Bader Ginsburg, fresh from major surgery), the diplomatic corps and the cabinet (including Hilary Clinton, the only one who wore hot pink).

Obama basically said “You know that guy you voted for? The one with the progressive agenda? I’m still that guy.” Despite a lot of talk that he has moved to the center (or totally sold out, depending on who you listen to), it looks like he is still planning to cut taxes for workers, raise taxes for the upper classes and eliminate the free ride for the super rich. He is still planning to get some kind of universal health care for the U.S. He wants to bring back the days when everyone who wants one can get a college education. He still believes that government is there to promote the common welfare, build infrastructure, pass fair legislation and enforce it, and provide a safety net for the people.

He radiated confidence and calm, and even made a joke or two, in the best tradition of people who are up against it but are willing to work to overcome, and pretty much know they will. I bet that most Americans who saw him went away feeling that we are in this together, that we will recover, and we will be better than we were before.

But to conservatives, especially those of the Apocalyptic, anti-Christ, End Times persuasion, this must have been a dismaying performance. They’re probably out buying more ammo and canned food for their mountain and desert hideouts right now. Even regular old Nixonian Republicans must have realized that Obama is on the verge of wreaking a permanent change in American society (as permanent and far-reaching as Roosevelt’s New Deal, which is to say not permanent, but pretty darn long lasting), and for better or for worse they may be consigned for the rest of their careers to the role of minority, opposition party. They don’t have much in their arsenal to fight back with, either. Expect them to pick at small points and try to make a big deal of them, and of course expect them to be yelling “class war” first thing tomorrow morning.

My favorite phrase from tonight’s speech:

“…we have lived through an era where too often, short-term gains were prized over long-term prosperity; where we failed to look beyond the next payment, the next quarter or the next election. A surplus became an excuse to transfer wealth to the wealthy instead of an opportunity to invest in our future.”

Of course it was a show. And good show, Mister President.