Republicans Have Now Realized Their Decades-Long Dream of Taking Over the Supreme Court.

I reached adulthood in the late 1960s, and looking around the political environment in those days, I thought the country was firmly set in the ways of fairness, honesty, compassion and unity. Before I was born, rich guy Franklin Roosevelt had reached “down” across the class barrier to offer federal support to regular folks during the Great Depression. Harry Truman had desegregated the Army. Social Security, which had been attacked by conservatives since its inception, had matured into a popular, successful program no longer questioned by the majority of Americans. When I was still a kid the Voting Rights Act and the Civil Rights Act were passed. Medicare was passed. The war in Vietnam was ended more or less by popular declamation. In the years to come the Supreme Court would hold that women had a right to control their own bodies, police couldn’t beat confessions out of suspects, and gay couples could marry if they wanted to. We were imperfect, but we were generous. We sought justice.

Republicans in the Senate are going to push through confirmation of Brett Kavanaugh, and it will look and feel as if they’ve scored a “win,” but little good can come of it for them.

The Supreme Court was specifically designed to be a non-partisan institution. That’s what the lifetime appointment was intended to accomplish. Justices wouldn’t have to answer to those in the political wings of government who put them on the court . Their only agenda would be to measure the law against the Constitution, and rule on cases based on whether the legislation in question adheres to the intent of our founding document.

After acting more or less like an adult for a couple of days, the Celebrity Apprentice President turns to Twitter to lash out at Christine Blasey Ford for daring to disrupt his Supreme Court party.

When Dr. Christine Blasey Ford’s identity was leaked and she decided she had to come forward with her story about Brett Kavanaugh trying to rape her when they were both in high school, everyone in Washington knew she’d have to be treated carefully. Mainly, they understood that they would have to act as if they believed her, and they would have to pretend to respect her as a woman, and not go down the Anita Hill road like they did in 1991. Mainly, this meant somehow stopping the president from tweeting something insulting or demeaning at her.

END_OF_DOCUMENT_TOKEN_TO_BE_REPLACED

I can’t seem to wake up from this nightmare.

Those who read here are aware of the litany of horrors that have proceeded from the election of Donald Trump — the Muslim ban, the sadistic “zero tolerance” policy at the southern border, the incompetent liars and buffoons appointed to the cabinet, the destruction of U.S. standing in the world, the reversal of efforts to deal with climate change, and so on ad infinitum.

And now Justice Anthony Kennedy is retiring. The Court is currently made up of four liberals, four conservatives, and Kennedy. Kennedy is a Republican, but of the old-fashioned non-partisan persuasion. He believes in the law over ideology, and he has been the “swing vote” over the years, as the Court upheld Roe vs. Wade, acknowledged constitutional rights for same-sex couples, and found the Affordable Care Act constitutional.

END_OF_DOCUMENT_TOKEN_TO_BE_REPLACED

…a same-sex couple, saying authorities had not been properly deferential to his (Evangelical Christian) religious beliefs at his hearing.

This week, the Court upheld Donald Trump’s ban on Muslims entering the United States, an executive order that has been stopped by the lower courts for a year and a half.

So there you have it. The United States is now officially an Evangelical Christian nation. Muslims need not apply. I wonder when Muslims who are already in the country will be asked to leave? Right wing bigots are certainly getting their money’s worth out of their stolen Court seat.

END_OF_DOCUMENT_TOKEN_TO_BE_REPLACED 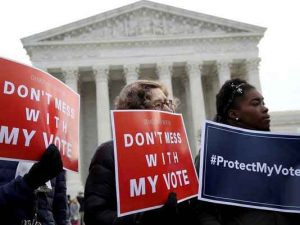