Donald Trump is as unqualified for his new job as anyone who’s ever won an election,

and yet his first four years as President of the United States may indeed turn out to be “successful.” Even though his complete lack of experience and inability to focus will lead him to turn over most governing to Congress and underlings in his administration, his habit of using Twitter and pep rallies to talk directly to his supporters could allow him to create an aura of “getting things done.” He takes credit for things he hasn’t done, pretends he didn’t say things that he was recorded saying and endlessly promotes his superior intelligence and knowledge of subjects 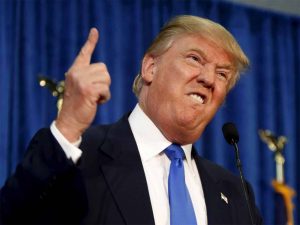 (foreign policy, cyber security, military strategy) that he clearly knows nothing about.

And many of his supporters believe him, or at least they act as if they do. This phenomenon has been explained by Trump spokespeople as “…taking him seriously, but not literally.” Thus, for example, he’s able to promise over and over for a year that he will definitely build a 2,000-mile wall across our southern border, but nobody gets upset when he reneges on that pledge a week after the election.

If he can get away with this kind of thing for four years, a large segment of American voters is going to think he is The Greatest President Ever. Thanks to the gullibility and/or ignorance of a lot of us, and Trump’s instinct for finding the shortest route to a cheap pat on the back, together with his willingness to say anything without regard to the truth, he may be able to sustain the charade long enough to be a viable candidate for reelection in 2020.

The Trump Administration is going to go down in history as the era when “truth” finally became completely uncoupled from actual facts. We saw this coming 16 years ago when an aide to George W.Bush told Ron Suskind of The New York Times that the reason he (Suskind) couldn’t understand the new administration was that he was living in the “reality-based community,” a place that Bush & Company did not reside. But during the past election campaign Trump abandoned even the pretense of caring about truth. He just made stuff up whenever he felt like it, so fast that there was not enough time to refute all his BS.

But if we are going to get the country back on track we are going to have to refute the BS. I’m a political junkie, and I spend a lot of time reading and studying what’s going on in government and public policy, so I usually can tell when a politician is dissembling or shading the truth. Whenever I see a falsehood on social media I try to correct it. I don’t expect Trump’s most ardent supporters will be swayed — they don’t take him literally, after all — but it’s important that blatant lies or completely inaccurate statements are challenged, so that uninformed readers won’t be confused when they come across something that makes no logical sense.

Trump’s preferred method of spreading these falsehoods and pumping up his own image is just talk on social media. When his talk is untrue, let’s call him out on it, on Facebook or right back at him on his own Twitter account.