The U.S. is dodging its responsibility to work for peace in the world. 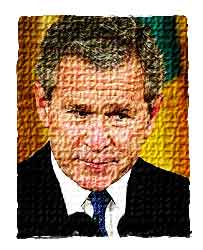 In spite of the Bush administration’s dimwitted foreign policy over the past six years, the United States remains the only country with the right combination of moral authority and actual muscle to talk some sense into the various factions that threaten the security of the world. Maybe it’s just my hippie penchant for trying to get along, but it seems to me that with those attributes comes the reponsibility not to look the other way.

It’s a very small world these days, and everybody’s got rockets and bombs and people who don’t mind dying for the cause, and hey – we’ve seen what a bunch of fanatic amateur pilots can do with a jetliner, so maybe it’s in our best interest to at least ask for restraint when a couple of hotheaded youngsters start going at it. We could get smacked in the back of the head while we are looking the other way.

For a week now, Israel has been bombing Lebanon, and Hizbollah has been shooting rockets into Israel. 300 people are dead, ninety percent of them civilians, the Lebanese infrastructure is being destroyed and the largest emergency evacuation since Dunkirk is under way, and there is no American diplomat over there knocking on the door saying “Hey! What are you guys doing?”

In fact, our President, the Compassionate Decider, was heard to say today “Sometimes it requires tragic situations to help bring clarity in the international community.” This nincompoop, this international laughingstock, this wannabe cowboy has actually mistaken himself for a wise elder statesman, and he is dispensing his wisdom to the world, while real leaders everywhere plead desperately for calm.

I wonder how tragic he wants it to get. In his soon-to-be-famous Mouthful-of-Dinner-Roll speech the other day, he told the Prime Minister of Great Britain (“Blair”) “…I think Condi’s going over there soon.” Today she said she’s not going until there is a chance of a long-term solution. Or when pigs fly, whichever occurs first. Maybe there’s a number they are considering, of deaths and dismemberments. Maybe there’s a dollar figure for rebuilding Lebanon, and they don’t want to act until that magic number is achieved.

Bush and Rice need to speak quickly and forcefully, to let the factions know this is unacceptable behavior, and the United States is willing to help broker a cease-fire. Tell the victims’ family members that we’re waiting for things to get real tragic, so we can have clarity. There is no time in the future that will be better than right now to start trying to heal the current mess in the middle east.

21 Replies to “Waiting For the Right Moment”