Holy shit, what a crazy dream I was having.
There was a TV game show host running for president against 16 nincompoops. The game show host was like, the head nincompoop: loud, obnoxious, insulting, racist, misogynistic, vindictive, and ignorant. Of course, in my dream, he gets the nomination, and ends up running against a really accomplished candidate from the other party. 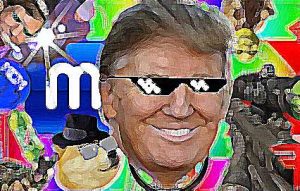 Nobody, including the game show host, thinks he’s going to win, but he’s so needy for attention that he plows ahead, improvising his campaign and preening before his supporters. Somewhere along the way it comes out that Russian computer hackers are helping him get elected by humiliating his more qualified rival for the job. Totally not believable, right? And then — you know how the weirdest things happen in dreams? — the game show guy — get this — wins the election! Nuts, huh?

Of course he has no idea how the government works, but he’s shot off his mouth for months about all the outrageous and hurtful things he’ll do when he’s the prez, so he has to go through the motions of “transitioning.” He spends the first month letting everybody know that he’s planning to renege on every single one of his campaign pledges except one: he’s going to take away everybody’s medical coverage! And his fans, for some reason, love it! Then he blows off daily presidential briefings because, he says, they’re too boring. “Oh oh,” I think in my dream, “he’s going to improvise his presidency, too!” I mean, I told you it was a crazy dream, right?

After a while he starts picking who he wants in his cabinet. He likes this part, because on TV he played a “boss,” who was powerful and smart and fired people on every episode. Here’s his chance to do it for realz! But remember, this is just a nutty dream — for each department he chooses somebody who’s made a career of destroying the very department they are now in charge of! If I were not sleeping, I could never make this stuff up!

Anyway, my dream starts to feel more like a nightmare as the game show host goes on Twitter day after day — and sometimes in the middle of the night — to attack people he hates for one reason or another, or to take credit for things that are happening around him that he had nothing to do with. It’s beginning to look like I’m about to descend into some kind of bizarre political hell for at least four years. I mean, a revenge-minded, petty, narcissistic sociopath is about to be handed the nuclear codes! Seriously, I must need psychiatric counseling or something, to be dreaming shit like this, right? This nightmare seems to last all freakin’ night, and finally, just as the obnoxious game show host is about to be inaugurated, I cry out and wake up in a cold sweat.

Thank God it’s only a dream.