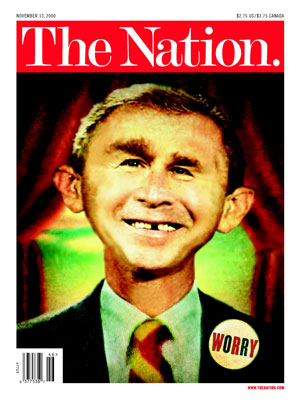 Tuesday is the last day of the George W. Bush presidency. I don’t feel exhilarated about that, as I thought I would. It would have been more satisfying to kick him out in 2004, or impeach him after 2006. Heaven knows he deserved to be sent home, or to prison, for most of his time in office. Quite a few Americans knew the truth in November of 2000, that we would not be well-served by “electing” a nincompoop who was, as they say, “born on third base and thinks he hit a triple.” Alas, almost half the electorate thought they’d like to have a beer with him. I wish they’d done just that, instead of voting for him. Eight years later, all but a small fraction of us wish we’d had that beer, gotten him drunk, and sent him home in an ice storm driving an old pickup with one headlight and bad tires.

In any case, we can hardly wait for him to leave our White House.

However, I am not down with the new President Obama’s apparent intention to let George and his band of criminal pals get away with what they have done. This is not having sex in the oval office, or failing to pay your taxes. The Bush Administration did Big Crimes, and we will all be paying for them for generations, so really, shouldn’t someone involved be held to account?

Let’s look at the charges (highlights only – I don’t have all day):

Some of this behavior is patently criminal, some of it merely incompetent. Either way, the Bush presidency has ruined the lives of millions and caused the deaths of hundreds of thousands more, both in the United States and around the world. No U.S. president in history has done so much damage, been so unqualified, so blithely clueless or so stupidly stubborn in the face of the facts. And he continues to make speeches and give interviews, making excuses for his failures, trying to rewrite history, and convince someone, anyone, that he is not leaving the world in a shambles. I mean, he took just eight years to fuck everything up, and the least he could do would be to show a little humility as he departs.

Don’t get me wrong: I’m hopeful for the future. I’ve always thought that smart people, while not infallible, have a better chance of governing well than dumbasses, and I believe we are getting a smart and thoughtful new President to lead us through the coming dark years.

Hey, we’ve had our fun. We scornfully blew off Old Europe, we abrogated nuclear treaties, we drove huge gas guzzling pigmobiles, we borrowed money we had no way of paying back, we used the exploding equity in our homes as ATM machines, we kicked some Muslim butt in the bad, bad Middle East, we partied hearty for eight years. But We The People now have to suffer the throbbing hangover, and accept responsibility for our part in it, and pay the bills for our gigantic party of self-absorption. It seems only right that George W. Bush should have to chip in in some real way to pay for his ruinous eight years in office, for his crimes and misdemeanors, for his wooden-headed arrogance, and for his constant mispronunciation of the word “nuclear.”

After that, let the new era begin!

I know I’ve left out some important Bush outrages and scandals, if not some more impeachable offenses. Feel free to fill in the blanks in the comments below. Truth now, reconciliation later. It’ll do you good.

Also, for excruciatingly more detail on the Bush crimes, see Hugh Makes A List. And thanks, Hugh, for this invaluable reference.