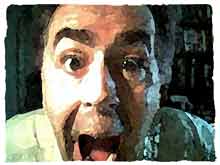 I don’t believe dreams are “sent” to us. I don’t think they are visions, and I don’t believe they allow us to see the future or know things we couldn’t otherwise know, like the exact moment our twin brother drove his car over the side of that mountain road in Tibet, or who was the last person Lacey Peterson saw.

Still, it is our own minds that put on these shows for us while we are sleeping. In essence it is one part of ourself telling stories to another part. If, during waking hours, I thought I was scaling the side of a ten-story building, or floating down from the top of it, you’d all think I was crazy, and you’d be right. But if it happens in a dream, it’s OK. It’s a window into my subconscious. It is me explaining what I think, what I fear, how I feel. To me.

I have had dreams in which I was terribly afraid. There was something that was going to “get” me. When I was very young it was often something known, like whales. I had a recurring dream when I was a child that I was being chased by a huge whale, and if I got out of the water it could come right up on land and continue the pursuit. Later my sleep was disturbed over and over by having “seen” The Flash. I grew up during The Cold War, when nuclear holocaust seemed inevitable. I would wake in horror, sit up in bed and wait for the shock wave, which would be a few seconds behind the flash and would vaporize everything. Never mind the bad science: This was scary.

These days I am too sophisticated for such foolishness, instead dreaming about vague, disquieting dread. I believe consciously that I can handle anything knowable that might come at me, so my mind can’t show me a picture of what it is that I must fear. It’s nothing that has a form, nothing I have seen in my waking life. On mornings after these dark, moody dreams I am jumpy and blue.

All of this stuff can show me something, I’m sure. I’m just not sure exactly what. What can I learn about myself from this dream? Maybe that I believe…

This last is troubling. I could have tried to climb up to the roof, to reach the pinnacle. Who knows what rewards I might have found? And if I had tried and not made it, the results would have been exactly the same as if I had not tried at all, but merely gave up.