“The right of the people to be secure in their persons, houses, papers, and effects, 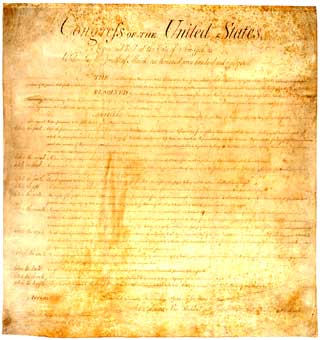 against unreasonable searches and seizures, shall not be violated, and no warrants shall issue, but upon probable cause, supported by oath or affirmation, and particularly describing the place to be searched, and the persons or things to be seized.”

This is the entire text of the 4th Amendment. The guys who wrote it were trying to avoid the kinds of personal invasions they had been experiencing, perpetrated by a system in which a monarch, claiming authority from God, could send police or troops to snoop wherever they wanted, confiscate whatever they saw and use whatever they found against whomever if it suited their purpose. It is admired everywhere in the world, although not always by totalitarian regimes.

Now President Bush seems to have violated this precept. He has publicly admitted that he has used an agency of the federal government (the National Security Agency) to wiretap citizens of the United States. He has said that his administration did not have warrants for their actions, nor did they seek warrants, nor do they intend to, despite the fact that there is a law requiring such warrants and providing a fast and secret way to obtain them through a special court. He has said that he intends to continue this program of surveillance.

Read the amendment again, and keep in mind that it is settled law in this country that “searches” include wiretaps.

Then tell me: How is this not an impeachable offense? Just so you don’t have to read the FISA statutes, let me tell you that violation is a felony carrying a five year prison term.

There is no way in hell that this president will be convicted and thrown out by the current Congress, or even the one that will be seated after the midterm elections this year. Impeachment merely means an investigation and a trial. It would get President Bush’s attention, and probably cause him to pay more attention to the “march of freedom” right here in this country. It would allow Congress to reassert its authority and oversight responsibility, which it has recently abdicated. A chastened George W. Bush could finish out his term, walking the line of good behavior, instead of swaggering over it. Only good things would flow from an impeachment at this time, while failure to stop this power grab would be a setback for individual freedom in our country.

It’s the House of Representatives that initiates impeachment proceedings, so if you’d like to see a restoration of our federal system of checks and balances, write to your congressperson. Later, you’ll want to let your senators know how you feel.

6 Replies to “Time to Impeach”