So it seems Benedict XVI is coming down squarely on the side of getting it on. 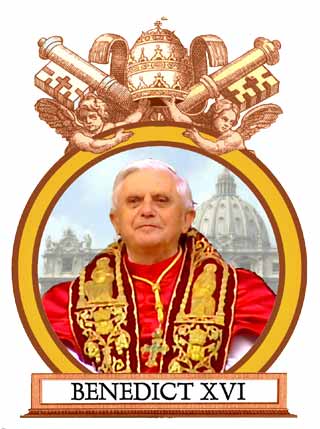 I say you go, Ben! As a sexually repressed former Catholic, imagine my surprise and relief on reading Pope Benedict’s new encyclical, “Deus Caritas Est” (God is Love), a teaching letter in which he encourages men and women to say “yes” to their bodily natures. “Love,” says the Pontiff. “…we cannot simply abandon it. We must take it up again, purify it and give back to it its original splendor.â€ Yes! This is his first encyclical, the one that most Pope-watchers say will set the tone for a new pope’s entire reign, and indeed Benedict has said that he wants Love to be the keystone of his papacy.

So this guy is going to be The Pope of Love. This comes as kind of a surprise because remember, his previous job in the Church was as the head of the Congregation for the Doctrine of the Faith, known historically as The Inquisition. This led some of us to think maybe he would become the Pope of Bondage and Discipline, but certainly no one expected the Love Pope. I mean, in this letter His Holiness actually goes so far as to say sex “…is, indeed, ecstasy…” Naughty Pope! Of course, he goes and spoils it a little by adding that it must be between a married man and his wife, and yes, the wife has to be a woman, and there is to be no “intoxication” and there has to be “self-sacrificing love” or else the whole thing is degrading.

Still, I have to hand it to the guy. He’s been celibate for like 60 years. There’s a pretty good chance he can’t remember the last time he did the nasty, and yet the first thing he writes as Pope is this cheerful guide to “ecstasy.” We may be starting to see a thaw in Holy Mother Church. In the next five hundred years I fully expect to see a softening in her stance on sexy lingerie.

Worn, of course, within the sacrament of Holy Matrimony. By the woman.

18 Replies to “No One Expects the Pope of Love”