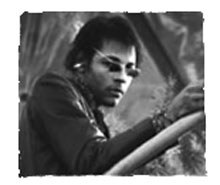 He died of leukemia in a hospital in Memphis, his hometown. In the 1960’s his band, Love, blazing for only two years, made music so powerful and compelling that even today many critics consider it the best ever. You’ll find their third album, Forever Changes, on many Top Ten lists.

After that release in 1967, Arthur started to waste his life and his abilities, and he kept it up for 35 years, including six in prison. I know a little bit about that kind of waste, and so I have an idea of how urgent it must have been for him to tour again, as he did starting in 2002, and to recapture the joy of playing and singing for people. I really, really wish he could have had more time, so he could have shone his light once more.

Arthur, do you remember cruising Pacific Coast Highway in the dark that summer of ’66? Me and my friends had all the windows rolled down on the Buick, and your record “7 and 7 Is” was playing on KRLA. The moon hung low, the waves pounded white on Huntington Beach, and anything was possible.

Goodbye Arthur. I’ll catch up with you soon.

2 Replies to “Alone Again, Or”