Fair warning: If you don’t want to read a cat post, turn back now. 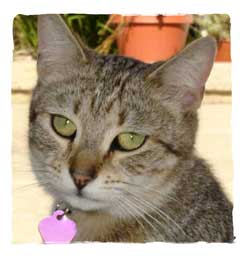 Tigger is a frequent visitor to the backyard lately, somewhat to the chagrin of the resident queen, Molly the Cat: 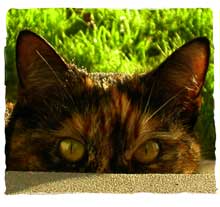 Tigger is outgoing, inquisitive, trusting and playful. He likes to par-tay. Molly, on the other hand, is reserved. Her idea of a good time is hiding in a bush, spying on the backyard. She can do this all day, even if nobody’s there.

Home is two doors down. We don’t really know the people who live there, but once when Tigger got trapped in our house by a door that blew shut, I caught him and read his little tag. “Tigger,” it said, and there was a phone number.

We called the number, because Tigger was acting like a lost cat, and we thought we’d try to help, and that’s how we found out he lived so close. The woman who answered was not concerned about the little guy, and indeed had not been missing him. She even volunteered that her husband didn’t like Tigger. Seems his heart had been stolen by a black cat who had recently died a violent traffic-related death. She told us that Tigger was not cuddly. Didn’t like people. Couldn’t stand to be picked up or petted. Always ran when he saw people coming.

We were pretty surprised, because this was exactly the opposite of what we saw. He loved to be with people, couldn’t get enough petting, always wanted to play. And he’s the cutest darned thing. At first he had dry, brittle fur, and he scratched a lot, even though he didn’t have fleas. And when the lady on the phone told us he was a year old, we were horrified, because he was the size of a six-month-old kitten. We discovered that Tigger had a brother, Bootsie, who was the alpha cat and ate most of the food. These are stupid names, aren’t they? I had nothing to do with them.

So we fed him. Not much at first, just a few bites here and there, but good quality stuff. Anyone who’s ever fed a stray cat knows where this is going, and over the course of six weeks, that’s exactly where it went. Tigger hung around more and more, and eventually he had a feeding schedule, just like Molly the Cat, although Tigger never gets to come in the house, which pleases M and frustrates T.

He thrived on the food (and attention) he got from us. His coat got shiny and luxuriant, and he gained a couple of pounds. Every now and then Bootsie would show up. Tigger obviously idolizes his big brother, but even in our yard Bootsie eats all the food, and Tigger quietly defers. In fact, it was after watching this deference once that I started feeding Tigger regular meals. I figured he just couldn’t get close enough to the food back home.

But today Miss B (Mrs. Jones) had another talk with the lady two doors down. She came looking for Tigger, and she found him at our house. She said she hadn’t seen him for two weeks.

Two weeks! Molly the Cat was a raggedy unattractive little stray when she came to us seven years ago, and to this day she’s kind of ornery and bitey, but if she went missing even for one day I would be all over the neighborhood looking for her. Molly the Cat is in the house for bed every night or I am out searching until I find her. And these people can ignore such a cutie-pie for two weeks?

Miss B and I have concluded that these people are not good cat stewards. They have a bad attitude toward Tigger, they don’t really know him at all, they don’t seem to be feeding him very well (witness his new shiny coat) and it took them two weeks to come looking for him.

And now they’d like us to stop feeding him, so he will stop coming to visit. Personally, I suspect he’ll continue to visit no matter what we do. He visited for weeks before we ever gave him a snack. But, hoo boy it will be hard to stop feeding him, now that he has come to expect it. He will give me that expectant look, and he won’t know what’s going on when I fail to come across with the goodies.

Our neighbor has hinted that if we like him so much maybe we should just keep him. But what about Molly the Cat? She hates him (she hates all visitors, human and animal), and she precipitates daily screaming confrontations with him (even though he is only mildly interested in her – they are both fixed). Then there’s the issue of Tigger’s big brother, playmate and role model, Bootsie. Would it be right to separate them? Plus, you know it’s easy to shoot off your mouth and say “Why don’t you just take him?” but if we said “Yeah, we want him,” I don’t know how she would react.

Tonight’s the first night in a month that Tigger won’t get any food here. He’s lounging on the back stoop right now, waiting for a late-night snack. Instead he will get a door closed gently in his face. I’ll try to comply with his owner’s wishes, but if I see him getting scrawny again, and his fur turning scruffy and scratchy, I don’t know how I’ll take it.

What do you think I should do? Cut off all food? Claim him as ours? Buy an RV and hit the road for two years? Or feed him surreptitiously, all the while claiming I am not feeding him?

11 Replies to “A Tale of Two Kitties”