I just realized that the residents of Baghdad are probably called “Baghdadis.”

I also realized that I know less about women than even I thought possible. Blogging women, anyway.

I fought in the Sexual Revolution of the 1960’s on the side of Free Love, raised consciousness, gender equality and mutual respect. Some of us thought that’s what women wanted, and I lived a large segment of my life thinking that. Turns out they want to be tied up and played with — spanked, tormented, tickled and sexually humiliated.

As you know, I am more of a blog reader than a blog writer, and I regularly cruise for blogs to enlighten me. Since half of all blogs are written by women in their thirties, I have become one with that demographic, and in the past ten days, I have read no fewer than five posts from these girls admitting, sometimes shyly, sometimes brazenly, that they are curious about this particular kink, and want to try it, with someone they trust, of course. These women are not web sluts cruising for horny guys willing to pay for a peek at their webcams. They are single and married Moms, working women, college students and computer geekettes and other apparently normal people.

What the fuck? Why didn’t I know about this? I didn’t get the memo, I guess. This is a fantasy that I gave up on as a boy, thinking it was unattainable/creepy/illegal/perverted. Sounds like fun now, though.

To get in the proper mood I will write a bit of soft core pornography, and post it here this evening. Get the candles ready and the ambient music queued.

In the meantime, while you wait for the dirty stuff, you may savor this picture. While I was working out this morning, I watched part of To Catch a Thief, with Cary Grant and Grace Kelly. The part I saw was the section in which they meet and get to know each other, over a 24-hour period. The chemistry is unbelievable, the erotic tension palpable — you don’t see it in movies these days — and the dialog is so fucking snappy I wanted to memorize all of it. Sadly, I was not able to. However, I did come to the conclusion that this woman is indeed a goddess. 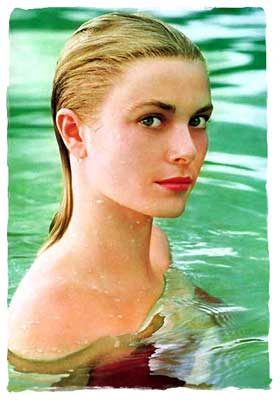