I think I know how Charlie Allnut felt. 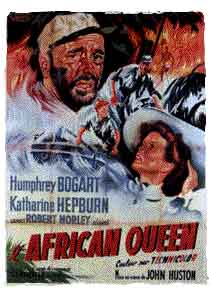 Humphrey Bogart and Kate Hepburn starred in The African Queen in 1951. He plays drunken riverboat Captain Charlie Allnut, she’s prim and proper spinster missionary Rose Sayer, and they are in Africa. His boat is a filthy, decrepit, 30-foot tub called The African Queen. In 1914, as World War 1 gets underway, they begin a journey, alone together, down the river. All I can say about the story is that they must get down the river to the lake at the end. It’s a matter of life and death. They must overcome many obstacles, but there is one scene in particular I am thinking of today.

On its way down river, the Queen becomes mired in weeds and muck, and surely they will die in the jungle if they don’t get moving. The broken down old steam engine can’t make any headway in the shallow, overgrown river, and the current isn’t strong enough to move the boat. Reluctantly, Charlie climbs overboard, attaches a line to the boat, and slowly begins to tow it himself, trudging slowly through the muddy river, a surly anti-hero, doing the right thing in spite of himself.

Eventually he climbs back into the boat for a break, and in a moment they both notice that he is covered with leeches!! They are all over his body, black, slimy slugs, tightly attached to his flesh and — say it with me — sucking his blood. He cries and dances in horror and revulsion, slapping at himself and begging Rose to “get ’em off me, get ’em off me!!” Together they peel the disgusting things off, and Charlie’s near-psychotic episode gradually subsides. When he can stop shaking from fear, Charlie and Rose must reassess their situation. The boat is still dead in the water, and there is still no current. It is clear what has to happen. Charlie, a look of infinite sorrow on his face, takes up the rope, slips over the side into the leech-infested river, and begins towing again. Only this time he knows what will happen to him while he is in the water.

That’s how I’ll feel when I go to my job tomorrow.