I was reading this story about how George W. Bush’s people are trying to book a hotel room in Austria for a summit meeting in June, but Mick Jagger’s already taken the room (because the Stones are playing there in June) and he won’t give it up. Of course I chuckled a bit, enjoying whatever frustration this might have cause The Decider in Chief. 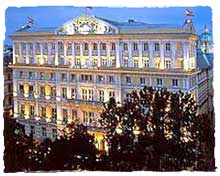 But then I got to thinking, this room costs $5,000 per day! It’s reputed to be among the 100 best hotel rooms in the world, whatever that might mean. It has chandeliers and oil paintings. So what’s the President doing staying in a place like that? Is that right? I won’t even say how long I would have to work at my crummy job to make the amount of money Bush would spend on that room in one night (if he could book it, heh, heh…), but it seems to me that the head of a pluralistic democracy ought to be a little more careful with the taxpayers’ money. I mean, don’t you think?

And as long as I was thinking deep thoughts, this is what I pondered next: Mick Jagger staying in a $5,000 hotel room. Huh. Seems pretty cool at first. But work with me here. Mick’s been in the band for over forty years. They had it rough for maybe two years before what we now call The British Invasion. After that he was rich beyond any possible dream of a postwar working class Brit, and the party has never stopped.

For a few years there must have been a sense of unreality as the fame and money flowed in. Like any young guy with sudden unbelievable good fortune, he (and his bandmates) no doubt committed some excesses, although I’m not sure I ever

believed that story about Keith Richard detoxing by having all his blood drained and replaced at a secret Swiss clinic in the seventies. I won’t go into all my suspicions. Let’s just say they probably tried everything at least once during those early years.

But it must have gotten progressively more difficult to be thrilled as time went on. How much blow can you do, how many groupies can you have, how many pairs of handmade Italian boots can you wear, how many Maseratis can you trash? And now here’s Mick, 40-plus years on, routinely staying at the Imperial Hotel in Vienna for $5,000 a day.

I’ve always thought I’d like to know how it feels to have more money than I’d know what to do with, and don’t get me wrong here: I think Jagger is smart enough to keep himself amused, but I wonder if sometimes, after everyone’s left and he’s alone sipping cognac in that room by the flickering light of a crystal chandelier, he doesn’t think back to the hardscrabble days, going to art school, buying imported American R&B 45’s, smoking cigarettes, drinking coffee and talking the night away with his friends about blues and babes.