I slipped out of the office to run some errands this past Tuesday. 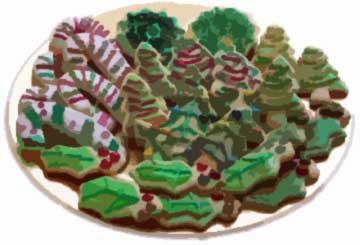 I take my crummy job all too seriously, and as a result I can get kind of surly with my coworkers. I don’t want to be that way, the guy everybody tries to avoid in the hall. I just resent having to work for a living, all the more because I think my company is stupid, so I’m a little crotchety sometimes.

But I thought I’d try to soften my image a little, so I went to a store and bought a 25 dollar tray of assorted holiday-themed cookies, red and green decorated sweets, laden with butter and sugar. I got it at one of those big box stores that also sell refrigerators, designer jeans, power tools and huge pallets of toilet paper, so I got to rub elbows with a lot of Christmas shoppers while I was at it. I noticed one of the popular toys this year seems to be an actual house. Kid-sized, but big enough to go inside, little three-room pads, complete with furniture, and built-ins in the kitchen. I saw a few of these rolling past the checkstands, unassembled in their huge cartons, illustrations on the outside of the finished product. I wondered if they came with kid-sized adjustable rate mortgages. That would be an educational toy.

I took my cookie tray out to the car and put it in the trunk. Midday traffic was heavy. Los Angeles was built for cars, but no one could have foreseen how many of us would be trying to use these streets and highways. Most of the roadways maxed out about ten years ago, so normal driving can be a challenge, but during those special times — Christmas shopping season, tsunami evacuations — you find out what “gridlock” means. I wanted to stop at the bank on my way back to work, and by the time I got there I was frazzled and getting surly again.

I was the only person at the counter at first, but while I was doing my banking and bantering with the teller another customer walked briskly up to the window next to mine. She was a skinny woman in her forties, wearing a pea coat and jeans that were designed to be tight, but which hung limply on her thin frame. Her jeans looked as if they’d been worn out the old fashioned way, not bought that way in a store. She had glossy auburn hair done in an improbable 1940’s style, ringlets down both sides of her face, which was pleasant, plain and bony. She wore a small holiday corsage made of fake green holly and festive red berries. She carried no purse or shopping bag.

“OK,” she said brightly, “the first thing I need to do is check my balance.”

Normally they won’t answer that question out loud. I don’t know why, but they just won’t. They always write it down and show it to you. But this guy punched a few keys on his terminal, squinted at his screen and said, in a voice that I could not help hearing, “You have twenty five dollars and eighty-three cents.”

She gave this only a second’s thought, then said “In that case I’ll take twenty-five dollars.” While the teller was getting that together, punching keys, sticking slips of paper into little printers, opening and closing drawers, the woman struck up a conversation with a bank officer seated well back from the teller windows. They apparently knew each other, in the way customers are led to think they “know” bank officers.

They exchanged the usual December pleasantries, about the weather, about the traffic, about not being ready for Christmas. They were talking loudly across a great distance — the distance from where the customers stand to the place where bank managers sit. Then the bank officer asked her how she’d been doing.

“Doing great! Well, except I’ve only had three job interviews this month. You know me — I really need like a hundred and fifty. But I’m fine. I feel good. I see so many people with such problems — no food, no friends, no place to sleep. I just feel so blessed. I’m sure I’ll find something someday. You know, there are worse things than just not having a job.”

The bank officer’s smile had started to coagulate on her face. The woman’s money had been counted and placed before her, five 5-dollar bills. My own transaction was finished. I picked up my stuff, went back to my office and made sure everybody got some Christmas cookies.