I am having a hard time getting back in the groove. 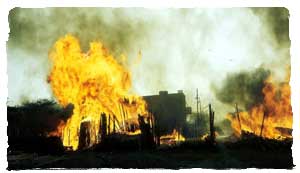 I guess I don’t want to get back in the stinking groove. I had a great weekend, with lots of high-speed driving on the California coast, more intellectual stimulation than I have experienced in years, lemon sorbet served inside a hollowed-out lemon – I was even smuggled into a hotel room without registering, and I stayed there for three days, and got away with it. Fuck The Man! (No, girls, I am not The Man.)

I was completely disconnected from the internet. I couldn’t check my email or read any blogs or post anything. Oh, I could have found an internet cafe in the university town I was in, but I was busy having fun. So imagine my surprise when I return to find that most of my otherwise genius readers don’t think they can write song lyrics! What the fuck?

When the Protest Song idea first occured to me, it was because I thought everyone was mad as hell and not willing to take it any more. MPH complained that there weren’t any good, rollicking countercultural change-the-world type of songs for his generation (whichever one that is) to rally ’round, and from the comments he got, I thought writing a protest song for the 21st century was an explosion ready to happen. Thus The revision99 Protest Song UnContest.

But will you look at yourselves?

What a bunch of weak sisters! You are writers, people! Take a peek at this example of “songwriting” from the 1960’s, and tell me you are intimidated:

The Eve of Destruction, by P.F. Sloane

Is anyone intimidated by this drivel? There should be a protest song protesting this song!! Yet – and you’ll have to trust me on this, because as The Oldest Blogger I know this to be true – that stupid song was played on the radio all over this country every hour, 24 hours a day for three months during 1965.

Really, how much effort would it take to scribble something that bad?

OK, you’re thinking “Hey, I’ve got a life, and my own blog. Why should I contribute lyrics that will only make Larry Jones rich and famous?” Fair enough. Here are the reasons:

As an added inducement, I promise not to:

So you can’t possibly lose. Everybody knows the music business is a pushover. Now you have a willing collaborator, and hey, let’s face it: In the end I will be doing most of the work, and you will be sitting back and taking the credit.

What are you waiting for? Don’t answer that! Here’s even more good news! You don’t have to write a whole song! That’s right, just send me your 21st Century Protest Song idea, in the form of a simple couplet or singable chorus, and I will somehow massage it into a song that’s guaranteed to be as good as The Eve of Destruction!

The first day of Summer is the deadline, so there’s just one more week to do this. Remember, there are no losers in The revision99 Protest Song UnContest. Only people who didn’t win. Member FDIC. Substantial penalty for early withdrawal. Details at this earlier post.