I was not aware that Vice President Cheney has recently been slandering former Senator George McGovern, 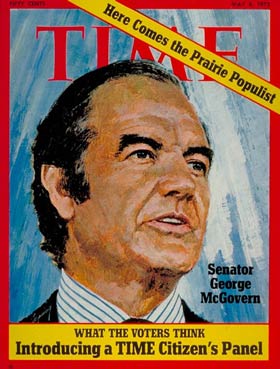 …but today in the Los Angeles Times I saw a rebuttal of sorts from McGovern. Actually, it’s more like an ass-kicking, something that I think the old Senator might still be capable of in person if Cheney ever dares show his face when George is around.

I’m not going to analyze the story. You can read it here, and you’d better hop to it before it disappears behind the news-for-money firewall at The Times.

But for younger readers. let me just say that George McGovern was the Democratic presidential candidate who lost the 1972 election in a landslide to the corrupt, unbalanced Republican incumbent Richard Nixon. It was an era of civil unrest, anger and alienation. Then as now, our government was involved in a war overseas with a small sovereign nation (Vietnam) which had not threatened the U.S. Like our current Iraq adventure, we were there on false pretenses fabricated by powerful corporate interests who are always the ones to profit from the slaughter. It seemed that the war would never end, and anyone who said it should was labeled a traitor or a defeatist. Sound familiar?

McGovern was not the first national figure to speak out against the war, but he was the one who mounted a real challenge to the snake-pit in the Pentagon and the White House, and he captured the imagination and the loyalty of a generation of disaffected youth, not to mention all the leftover pacifists from the fifties and the sixties.

Of course he had to be crushed, and the Nixon stink machine raised dirty campaigning to a new and slimy art form. McGovern’s defeat that year was a heartbreak that I still haven’t gotten over, and to think that the certifiably evil Dick Cheney (I certify it myself!) has now reached back into history to vilify this honorable man…

Go read the article. If you’re already in the choir, you’ll enjoy singing along. If you’re not, how do you sleep?

6 Replies to “George and Dick In The Woodshed”