28 people dead in Newtown today, including 20 little kids, shot in their classroom.

It’s such an outrage that there will certainly be calls to restrict gun ownership or ban them altogether. I’d happily go along with that, but thanks to the gun lobby we can’t even speak the word “ban.” We can’t even have a conversation about gun control. The debate is so warped in our country that — and I can guarantee this — there will be those who say that teachers should be armed, and that would prevent these types of murderous rampages. See the logic? More guns=less shooting. Me neither. 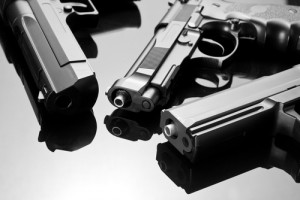 Few civilized societies in the world today tolerate the kind of firearm profusion that we do in the United States. As of 2009 there were 310 million non-military guns in the U.S., one for every man, woman and child, including newborns. That year there were 17,000 homicides in the U.S., 12,000 of them by firearm. In fact, with that many guns floating around, you could say that there is no solution to the problem of folks going crazy and shooting up their schools, their workplaces, theaters, malls and neighborhoods.

I won’t try to fight the NRA, the gun manufacturers or the cranks who think they need guns to protect themselves against being herded by the federal government into concentration camps in the Mojave desert. Their twisted logic has so permeated the culture that there’s no percentage in debating it. But I’m ready for our government — city, state and federal — to take some action.

I propose a ban on assault weapons and big ammunition clips. Much heavier penalties for possession or modification of fully automatic rifles. Deep background checks (paid for by the prospective purchaser) on anyone who wants to buy a gun of any kind, and a good long waiting period. Licensing of gun owners. Serious penalties on gun owners whose negligence allows their weapons to fall into the hands of unauthorized or unlicensed others. And a high enough tax on gun purchases to create a fund to help rebuild the lives of the inevitable victims and their families, as we have done with cigarette taxes.

There are so many guns already out there, legal and unregistered, that anything we do to curb their proliferation will not begin to be effective for generations. But in 85 years it will be the turn of the century again, whether or not we start now trying to fix this problem. Most of us won’t be around by then. I wonder if those who are will thank us for our foresight, or curse us for our stupidity.

4 Replies to “Grownups: Please Step Up”