So I was freaked out that the voters in San Diego apparently haven’t had enough political corruption. 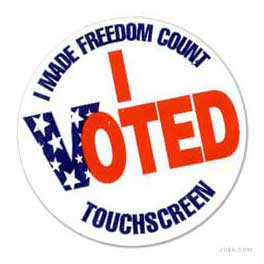 I wrote about it right after the June 6 election in California. It seems that noted Republican bribe-taker Randy “Duke” Cunningham was unable to serve as their congressional representative any longer because he was in prison – hello? – and I was hoping the voters down there would send a message to the Republican Party that the fun was coming to an end. I thought they could send that message by not electing another Republican, but to my surprise, on the morning of June 7, the Republican won it in a close race.

So the guy (Brian Bilbray) is already sworn in, which I’m sure must be some kind of a record for swearing people in – isn’t there supposed to be some waiting period, for certification or something? – but now it turns out that the whole election was a sham! Imagine this: a Republican wins a close race, has a quickie swearing in and marches off to Washington, only now it turns out that the voting machines they used were severely compromised, and no one knows for sure if the vote count was accurate, or even close! Does any of this sound familiar?

According to Brad Friedman (BradBlog):

The election was run on highly hackable Diebold voting machines that were sent home overnight and unsecurely with poll workers for days prior to the election which rendered the machines both illegal and uncertified for use in the election under both federal and state laws, requirements and statutes. The GOP has since rushed to swear-in Bilbray before the votes were counted, or the election even certified by the state of California.

In case you don’t want to track down all of these links, allow me to summarize: The Diebold voting machines have been examined by computer experts, who say they would have no trouble changing the software and the operating system in two minutes without a password. In light of this vulnerability, the State of California has a bunch of rules about securing the “chain of custody” of these machines prior to and following any election. Mainly, the idea is to ensure that the machines are not tampered with. But the San Diego registrar of voters, needing some temporary storage in the week preceding this past election, sent a number of the voting machines home with volunteer poll workers, to be stored in their spare bedrooms, garages, back porches, etc., and completely without official supervision.

This is against state and federal law, and it completely invalidates the results of the election as reported so far. The only way to know who won is to do a hand recount. I don’t know if this is even possible, but a complication might be that the newly “elected” official is already sworn in.

I’m not going to say that the Republicans are pulling a fast one here, but this is symbolically a very important election, and there is considerable evidence that the GOP is willing to do anything to stay in power (see Florida, 2000 and Ohio, 2004). Will Democrats roll over again, not wanting to be perceived as sore losers? At what point will the American voters say “Enough!”?

Personally, I’ve had enough. I think today maybe I will officially join the conspiracy theorists. Just because I have a crazy look in my eyes doesn’t mean I’m wrong about this. Elections have been and are being stolen, people. Get a good laugh at my expense if you like, but if you don’t think the power structure in this or any other country won’t do what it takes to stay in power and keep you out, take a look at some newsreel footage of the 1968 Chicago police attacks on demonstrators at the Democratic National Convention. The radical right wingnuts in this administration have done all they can to subdue the population short of shooting us.

Are we going to wait for that to start again?

If, like me, you are a little concerned about this, here’s something you can do: There is an online petition at Velvet Revolution. The form will be sent to the Busby campaign, the San Diego registrar’s office and California Secretary of State Bruce McPherson’s office. You may also send your personal comments only to your nearest daily local newspaper as well if you select that option. A recount might not change the outcome of this election, but we must defend the integrity of our electoral system. If we lose our faith in it we’re in for a rough ride.

Note: For the time being, the main page of The Brad Blog will be a good place to read about this story. If you happen to be reading this post at some time in the future, after President Jeb Bush has declared blogs illegal, relevant information can probably be found here.