Might as well add my two cents to this issue: 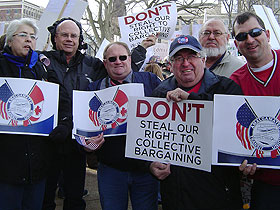 What’s going on in Wisconsin right now — the Republican governor and Republican majority in the state legislature attempting to cripple public employee unions — is not a political matter. It’s an economic matter. It’s another battle in the war on workers and the middle class that began in the eighties. It’s rich people and and rich corporations trying to get rid of labor unions and kill off the pesky middle class once and for all.

In the 2006 election the people of Wisconsin, like most voters nationwide, decided that the Democrats had had long enough to bring the economy back to life (two years), so they voted for Republicans instead. A lot of Democrats must have voted for Republicans, because Republican candidates can’t win with only Republicans voting for them. Whenever the voters do this, they live to regret it, although they rarely understand exactly how they got fucked.

Because the real constituents of the GOP — those rich people and rich corporations — don’t see anything wrong with the economy.Â They’re doing just fine, thank you, so what is there to “bring back to life?”

Understand, when I say “rich people” and “rich corporations,” I’m talking about unimaginable wealth. Unspendable amounts of money. Since Ronald Reagan got the ball rolling by destroying the air traffic controllers union in 1981, the working class in this country has seen their income stagnate or decline, while the upper class has taken most of that income and wealth for themselves. The top one hundredth of one percent of Americans now makes an average of $27 million per household, while the average income for the bottom 90% of us is a little over $31,000. Meanwhile, tax rates are currently at a 50-year low, and as billionaire Warren Buffet famously says, he is taxed at a lower rate than his secretary.

Yet these super rich don’t have enough. They have taken most of our jobs and sent them to countries where people are happy to work for a tiny fraction of what it costs to live in America, and now they say that American workers must “learn to compete in a global economy.” What they mean is we must learn to live on seven dollars an hour. In the future, even that seven bucks will be deemed too extravagant.

During most of the 20th century, the most prosperous century for the the most prosperous nation the world has ever known, labor unions have been the only protection the worker has had against powerful corporations, and so they are the natural enemy of the rich. The war has been going on for some time, and Wisconsin Governor Scott Walker’s plan to strip public employee unions of the right to collective bargaining is only the latest battle.

But it’s not really Democrats against Republicans. It’s the upper class trying to see if the time might be right — after two generations of misinformation — to turn workers against themselves. Recent polling seems to indicate that a majority in Wisconsin is not OK with this union-busting plan, regardless of how they may have voted in the last election.

The Republican majority in the state government may listen to this majority, or they may not. They are, after all, contolled by powerful corporate interests. Either way, judging from the massive protests going on in Wisconsin, it seems that the time has not yet arrived when American workers are ready to submit to this type of outrage.

But the American worker is in disarray, confused, divided against himself. We have been fed a stream of lies for such a long time that it has become difficult for us to see the truth. Most of us don’t want or need to earn a hundred million dollars a year. We want fair pay for honest work, decent working conditions, the ability to raise our families, go to the doctor when we need to, take a vacation every now and then, and live out our last years in dignity. It doesn’t seem like a lot to ask in this land of plenty.

Of course the upper class will fight us even in this modest ambition, because they and their corporations are programmed always to find ways to accumulate more and more money. They don’t “hate” the working class. But if the working class is comfortable, that means there is money on the table, and rich people will go after it.

They are well organized, smart, relentless and ruthless. I wonder if we are up to it.