If he had lived, he would be 98 today. But he died a long time ago, exactly 19 years after I was born. He was rip snorting drunk a good portion of those 19 years, and just plain not around for a few of them, so I only knew him the way a child knows his parents. We never got to talk at a time when I was mature 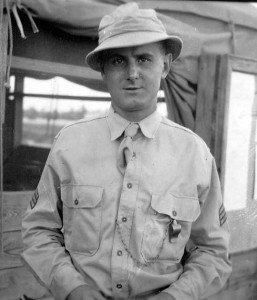 enough to ask the important questions, let alone understand the answers. A lot of what I think I know is pieced together from things he told me, or things I heard from others.

He came from a huge Catholic family. I am out of touch with almost all of them now, and I don’t remember most of them anyway, but he had something like five brothers and three or four sisters. By his own admission he was a troublemaker in grade school, and claimed to have quit altogether after 5th grade. I have no idea what he was into from then until his teens, but as a young man he joined the National Guard. I suspect that he had no particular patriotic motive, but just needed the cash during the depression of the 1930’s.

He was in the infantry in Europe during World War 2. I gather his mission was to lay communication wire. He said the Germans were jamming the radios, or maybe they were listening in, I don’t know, so the Allies resorted to laying telephone wire across the battlefields, for secure command and control. He got out of the Army in 1946.

I have come to think of the war years as the defining time of his life. Some of my earliest memories are of him getting liquored up and desperately trying to relive his days as a staff sergeant, gathering his little family and forcing us to listen to him describe mostly routine military stuff, like marching and saluting and polishing your boots and making your bed so a coin would bounce on the bedspread.

These topics didn’t come up when he wasn’t drinking, so I came to associate military talk with the angry, threatening drunk in our house. I don’t know if getting drunk made him think back to his Army days or if his experience in the Army made him want to get drunk. Once — only once — he told me of an actual combat incident, a time when he managed to blow up a German military vehicle, knowing that two soldiers were inside of it. I have no idea how he did it, or even if it really happened, but he wept in front of me when he told the story. I was confused at the time: Weren’t these Germans the enemy? What was wrong with incinerating them? Why would a grown man — a soldier — cry about it? Today I think I know.

I disappointed him. I wasn’t a brawler like him, or — during his lifetime — a drinker. I didn’t care to fish or hunt like he did with his brothers. I was a soft kid, a reader, a musician. I was in college during the last year of his life, and he had already written me off as an over educated oaf — his words exactly. I hope my memory is not playing tricks on me when I tell you that in his last few months I made my peace with him. Not directly face to face, because you can’t do that with an addict, but in my heart I forgave him, and I loved him, because he was my dad and he’d had it impossibly hard and he didn’t know how to deal with the whirlwind that was his life.

I don’t know if my father loved me, his firstborn. My parents had five children, and thinking back over those years it now seems to me that he — they — must have been scrambling like crazy to keep up with the life they had made for themselves. They survived the Depression, served in the War, then got married in a fever and before they knew it, had five kids. I’m sure it was all they could do to keep it together.

But I do know that I got an electric train for my fifth Christmas. A Lionel electric train. Just a small oval track, a locomotive and three cars, but it was a complete surprise and, to me, the best gift ever. It was set up and circling the base of the Christmas tree when I first saw it. Many years later my mother told me that he had bought it for me on the day I was born.

Happy birthday Pop, and thanks.

One Reply to “A Reminiscence”