Yesterday I saw a piece on TV about staff Sergeant Salvatore Giunta, the first U.S. soldier since Vietnam to get the Medal of Honor while he was still alive. You usually get that one when you’re dead. Sergeant Giunta did some insane heroic stuff in Afghanistan, rescued a couple of guys who were certain to be killed, got shot himself and made it out alive.

This morning I saw the President make a speech about our brave fighting men and women. Obama stood in front of a flag and intoned the same old cliches that must be intoned every year, how they willingly went and got killed to preserve our freedom, and how more people had to be ready to do the same, or else the last bunch would have died in vain. I had to stop watching and go to work, but I would bet that the rest of the television day was all patriotism all the time, except for the soaps and reruns of George Lopez. 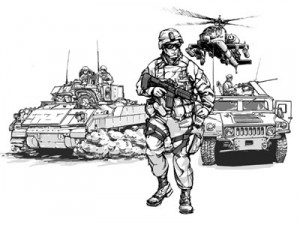 If you’re reading here you might already know what I think about all this. I think it’s bullshit. Sergeant Giunta will almost certainly now be against war. He will tell anyone who’ll listen that he’s not a hero, that war is a brutal horror that does not lead to glory. And then in about 18 years, he will send his son off to fight, to kill, and maybe get killed.

I’m sad that it has taken me so long to recognize this pathetic truth, that we humans can’t get along, that our veneer of civility is so thin it barely hides the hatred and the violence in our hearts. That the bully always wins.

As I was growing up I watched my father relive the atrocities of World War 2, and I still shudder to think of what it did to him. As a young man I came to understand that the war in Vietnam was a sham, built on the ridiculous premise that somehow by destroying that beautiful little country and terrorizing its people we were stopping the international communist menace. It was laughable except for the real deaths and maimings that happened all day every day for years. When our protests finally forced the government to abandon that war, I thought we had won a lasting peace, that the nation had learned a lesson. Some joke.

Of course millions more have died and been injured since then. Every generation allows itself to be conned into believing that we must fight one more war, one more defense of our way of life. We know it is wrong and it will be horrible, we tell ourselves, but this time it is necessary, because our freedom is threatened, our honor is challenged, and we must not let the memory of our dead heroes be defiled. And so each generation repeats the stupidity.

The soldiers don’t realize it, but they are not fighting to protect our freedom. They are giving up their lives and their limbs and their brains to protect our oil companies and to enrich our arms dealers. I’m not saying they’re not brave or worthy of respect, or that they never accomplish anything good. I’m saying they’ve been conned, and they don’t know what they’re doing.

Moms and dads of America, how do you teach your little ones not to touch a hot stove? Do you let them touch it and burn themselves? Or do you advise them in the strongest possible way never, ever to put their precious little hands on the hot metal?

You know the danger, and they don’t. You should tell them.