I’ll vote for John Edwards when my state has it’s primary, and you should, too. 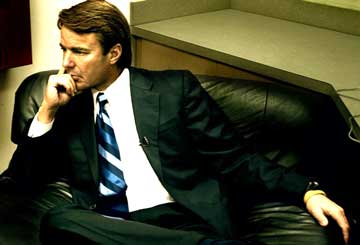 As I said in my previous post, the winner of the Democratic presidential nomination will be our next president. So a lot of liberals/progressives/Democrats might have already stopped worrying about the future, secure in the knowledge that next January a grown-up will take office and things will get back to normal. But it really shouldn’t be good enough for any American that the new occupant of the White House will simply not be George Bush.

The Rove/Cheney/Bush years have done more damage to our standing in the world, to our educational system and our health care system, and to the economic viability of our working class than any administration during my long lifetime (that’s six decades). We don’t need to manage the mess. We need to clean it up, and we need to get started on that right away.

Of the three top Democratic candidates, John Edwards seems to be the only one who understands that the concentration of our nation’s wealth into the hands of a tiny minority is not only unfair, but in the end warps the political system itself: Money grants power, and as the money is distributed more and more up the class ladder, so goes the power, until the working people who create the wealth in the first place find themselves disenfranchised, their health care (if they’re lucky) served to them by insurance conglomerates who provide no medicine, but take their profits anyway, their votes directed to one or two preselected “safe” candidates, their judges appointed by an ever more insular ruling class, their laws written by lobbyists, their jobs reduced to low-paid, insecure drudgery as the corporatocracy engages in a global “race to the bottom” in wages and working conditions. John Edwards understands that Americaâ€™s middle class is being systematically shredded, and without a healthy, educated middle class we will lose our democracy.

Edwards also knows that the wealthy elite in government and business will not relinquish their power and their unprecedented wealth simply because we ask them nicely, or present compelling logic as to why this is important to our republic.

And he is ready to fight them to take back the power. He has made a career as an attorney defending the rights of people who got run over by powerful corporations in their thoughtless scramble to accumulate more and more money. He fought for the little guy and won. He made the powerful pay, and this is what he says he will do as President. That’s the kind of President I want.

The national press and television news, which are owned by the nation’s largest and richest corporations, would like John Edwards to go away. They want him to drop out and leave the race to Barack Obama and Hillary Clinton. They take Edwards at his word that he will be a friend of the people, and so they have tried to defeat him early in this presidential campaign, by making him invisible. He won’t be one of their preselected safe candidates, and it scares them that, despite a virtual blackout on coverage of him, his campaign continues.

I am inspired by the rhetoric of Barack Obama, but I can’t figure out what his plans are to make any of his campaign dreams come true. I look back longingly at the years of Bill Clinton’s presidency, but those days are over and I don’t believe Hillary Clinton can bring them back. Both Obama and Clinton have been in the Senate since the Democratic takeover in 2006, and they have been unable to stop the current president from getting everything he wants legislatively, even though he is less popular than Richard Nixon. In fact, it doesn’t look to me as if they have even tried. And in national polls taken prior to the early state primaries, neither Obama nor Clinton were as strong against probable Republican presidential opponents as John Edwards.

John Edwards has specific proposals to end the war in Iraq, bring about universal health coverage, reform the tax code, rescue the middle class, and more. He’s known as a smart and tireless fighter in the courtroom, always prepared, always focused. He’s been honest enough to admit that it was a mistake to give George Bush the power to attack Iraq in 2003, and hasn’t tried to hide behind an “if I knew then what I know now” excuse.

I believe he’d be a great president. He says he’ll stay in the race until the nominating convention. That means we all have a chance to vote for him, to poke a sharp stick in the eyes of the corporate media and demand a candidate with a real program. Only two states have held primaries so far. There’s a long way to go. Check out his web site. If he makes as much sense to you as he does to me, and if you’re tired of Chris Matthews telling you what to think, give him your vote in your state’s primary.

11 Replies to “John Edwards For President”