The mission was “accomplished” four years ago. 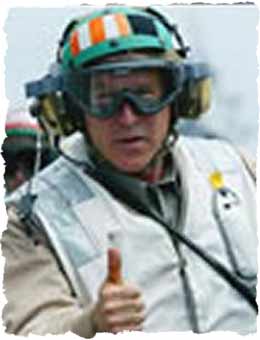 Since then several hundred thousand people have died in Iraq, our military has been stretched to the breaking point, a half-trillion dollars has been wasted, worldwide terrorist incidents have more than doubled and the American voters have sent a clear message to this president that they want out, NOW.

Yet the President continues to insist that we stay there, even escalate our presence there, despite all the evidence that the fun is over, and we have lost all our marbles.

Bush could have signed the current funding bill. Politically, it would have made a lot of sense. He could have acted as if he hated the idea of surrender, but the Democrats were forcing it on him, and if he wanted the money to keep our troops safe and well-equipped he had no choice but to sign the odious funding bill with the timetable for getting out. Then when it actually came time to get out, it would be right before the next election and he could claim credit for ending the war. Nixon called it “peace with honor,” but I’m sure the current crop of Orwellian spin doctors would have come up with a better slogan. There’s no way the Republicans will win the White House in 2008, but this strategy would have cut their loses in the Congressional elections, and Bush would come out of it looking like a statesman. Completely aside from the rightness or wrongness of it from a moral standpoint (like, what does he care about that?), it would allow him to write a fitting end to the fairy tale of his life that he’s been spinning for the past six years.

Is it because the war is an excellent diversion from what the neocons are really up to? Is it because they’d rather have us all angry and frustrated and incredulous and demonstrating against the war, when what’s really going on is something else altogether, something more important to them than human life and the honor and reputation of their country?

Is it because they don’t want us to notice that they are looting the United States Treasury, destroying labor and the middle class, redistributing all the money into their own pockets? Are they using this insane war to distract us from the sight of their curly little tales wiggling and the sound of their rapacious snorting as they belly up to the public trough and take their fill of your tax dollars? Are they hoping the war will keep us from noticing that we are being turned into worker drones, working more and more hours for less and less real compensation, and always with the threat that our jobs could be done for even less by someone overseas if we don’t like it?