On my third night in Ketchikan I was drinking J&B. 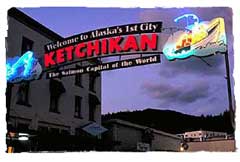 It was expensive, because everything is expensive in Ketchikan. You’d think it was Manhattan, or Paris, if you looked at your bar tab. If you looked at the bar, on the other hand, you’d think you were in Ketchikan. The place was decorated with totems, wagon wheels and stuffed animal trophies, heads with frozen angry faces bursting out of the walls here and there. Sawdust on the floor. The owner of the joint says it’s last night’s furniture, like no one’s ever heard that one before.

The owner’s name was Jeff, and he wasn’t from around those parts. He was a good-looking guy in his thirties, five-ten, 175, sandy hair, hazel eyes behind wire-rimmed specs, two shades too pale for the neighborhood. He was trying to go native with a plaid flannel shirt and a patchy beard, but it wasn’t working. I never got it straight exactly what he was doing running a bar in Alaska, but he’d been there a couple of years, and he seemed to be doing all right.

Right around last call Debbie the waitress brought a tray of six drinks to my table, where I was sitting alone, recovering from five sets of rock’n’roll. J&B neat, water back. I asked if she was planning to join me. She told me no, that I’d been six-packed.

If Alaska had been a separate country, which a lot of the residents think it is anyway, drinking would be the National Pastime. It’s a young, rough place. A lot of rugged individuals, also known as misfits, a lot of folks who have run away from something or somebody, losers who think they’ve got nothing left to lose. The days are short, the nights are long and the loneliness blows through your coat like the north wind. So you drink. First to get warm, then to stay warm. Then to loosen up, then to keep up. All the usual reasons, only faster and bigger, Alaska-style, until the whole room is buzzed and buzzing, everyone a little stiff, a little loose, ready for anything, prepared for nothing.

Six-packing, as it was explained to me, was the practice of finding out what someone is drinking, and buying him six rounds of it. If you don’t kill them all before the ice melts, Debbie told me, you don’t have a hair on your ass. I guessed that if you do finish them, you get to be an honorary Alaskan, drunk like everyone else. I had a little extra time to complete the challenge, since there was no ice, but I was young and stupid, and I wouldn’t let my benefactor down.

She was a fortyish babe with impossibly black hair, sparkling dangly earrings and full lips. They were painted red, to go with the minidress. I’d seen her there the night before, in jeans, stalking the room. Tonight she was with a girlfriend, drinking, smoking and getting braver.

To show I was thankful she’d picked me, I downed two shots of whiskey fast, then held the third one up toward her table before hammering that one, too. After a minute the girlfriend got up and went to the bar, and I went over to talk.

I put both hands on her table and leaned down. “Are you trying to get me drunk?” My tongue was numb.

“Is it working?” She gave me a nervous smile and shrugged one full, ripe shoulder. She was wearing Ciara. I suddenly felt warm.

We danced. The jukebox played Solomon Burke, “Cry to Me.” Grown-up heartbroke R&B. When your baby leaves you all alone... She put both arms up around my neck. …and nobody calls you on the phone… I bent a knee and she let it get between her thighs, the minidress riding up. …Dontcha feel like cryin’? She clung tight and pushed herself against me. Here I am, honey. Cry to me.

We were strangers, but we had always known each other, the way strangers at last call always know each other. I didn’t need her name, she didn’t want my promise.

Later, at the door, getting into our heavy coats, I remembered my three remaining drinks. “Never mind,” she whispered. “I’ve got something at home.”