I was somewhat disgusted by the spectacle of Ann Curry, upon whom I have a slight crush, sucking up to Jenna Bush on the Today Show this morning. 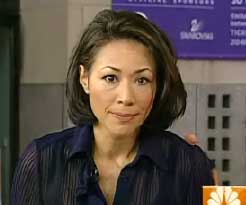 Ann is a pro, though, a description that also applies to prostitutes, so I shouldn’t have been surprised to hear her say more than once during the “EXCLUSIVE!” interview that she would be so proud of Jenna if she (Ann) were her mother. Ostensibly, Ann said this because Jenna has written a book in which she professes concern for disadvantaged people in Latin America,* but actually it was probably corporate penance required of NBC for allowing Bruce Springsteen to say bad things about Jenna’s dad last Friday.

This, in part, is what he said:

. . . over the past six years we’ve had to add to the American picture: rendition, illegal wiretapping, voter suppression, no habeus corpus, the neglect of that great city New Orleans and its people, an attack on the Constitution. And the loss of our best men and women in a tragic war.

This is a song about things that shouldn’t happen here happening here. So right now we plan to do something about it, we plan to sing about it. I know it’s early (in the morning), but it’s late. So come and join us.

What a dilemma for NBC! The Boss has a new record out and he’ll play in the street for you to promote it (Yay! Big ratings!), but you have to let him talk, and then he goes and shoots off his mouth like that (Boo! Controversy!). There goes your access to the White House. David Gregory never gets called on in a news conference again!

But then two days later Jenna wants to promote her book, and presto! Problem solved! Just have Ann get a lip lock on Jenna’s butt, and fawn over her for not one but two interviews on the same episode of The Today show. I think my link at the top contains video of these extremely sappy interviews, but I’m at work, where there is no such thing as streaming video, so somebody please let me know what you find.
OK, seriously, I understand that these morning talk shows exist primarily for authors and movie stars and political figures to promote their books, movies and selves to us, but really, aren’t you supposed to just toss them softball questions? I mean, come on, Annie — let Jenna promote her own book! You don’t have to do it for her.

Whatever. But congratulations to Springsteen for speaking up the way he did. I’m dismayed that more of us aren’t doing it.

In other aging rock star news, apparently Genesis has gotten back together and staged an elaborate paid rehearsal in Cleveland in preparation for their real shows here in L.A. Check Blue Girl’s blog for many obscure insider observations on this.

*Please note that I do not doubt Jenna’s sincerity. But if she says she’s not running for President, get your “Jenna in 2016” posters ready.

12 Replies to “NBC Gets Right With President”