I had almost given up hope of fulfilling my lifelong dream of finding out firsthand what it would be like to live under a fascist state.

But it looks now as if I’m going to get a chance. Donald Trump is a fascist, and now he is president. His party also controls both houses of the legislature and soon they will have packed the Supreme Court with like-minded partisan ideologues. They’ll be able to pass any laws they want, and repeal any, too (I’m looking at you, Obamacare). Should anyone point out that something they’ve done goes against our constitution, the court will shoot that down. 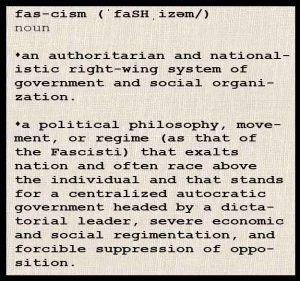 Of course we have to hope that President Trump will be a good man in office and work for the betterment of all people. But he pretty much ran on promises to do exactly the opposite of that, and the people who voted for him expect him to make good on those promises: killing off universal health care, banning Muslims, destroying Planned Parenthood, bombing “the shit out of” somebody, building a giant wall down south, and starting trade wars with our international partners, to name just a few planks of his “platform.” I know a lot of his supporters are willing to hand him complete authority as “the only one who can fix it,” and that is pretty much what they’ve done, but I don’t think they’ve thought that through, and we will all live to regret it.

Not that in a fascist state we will be able to do anything about it, but it seems to me the only patriotic thing to do is to oppose him at every turn. History will judge us harshly for what we did yesterday, but if we don’t stand and fight now, it will condemn us forever.