When there is music and strong drink on a Saturday night, everyone is happy. 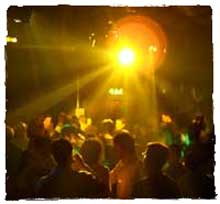 I’d half-forgotten the buzz that surrounds these places. The places we gather – the bars, the clubs, the cafÃ©s where we drink and mingle and meet and hustle. But there it was, from the moment I walked into the little place on Fourth Street. The cumulative voice of a hundred people, all those many lives breeding all those conversations and melding into the Big Talk that goes on in bars. At any given moment, half of it is lies, and we rarely stay with it long enough to figure out which half we are hearing. I usually believe it all.

The woman next to me at the bar was having a hard time ordering her drink. She wanted a straight shot of tequila, but something good, not the well stuff. She didn’t know the language, or the brands, had no idea what to say, and the bartender was patient but quizzical, wanting to fill the order, but eyeing her other customers, who evidently knew what they wanted. I wanted everybody to stay happy, so I ordered her a shot of Patron Reposado, neat. The bartender looked relieved and poured a double. As an afterthought I asked for water back. The Patron is mellow, but maybe not that mellow. Jones to the rescue.

The band took a break just as I arrived, a mixed blessing. I’d have to talk to them before I knew what they sounded like. On the other hand, I’d be able to let the singer know I was there to support her. She was a woman I had known for some time not as a professional musician, but as a hairdresser, a wife, a mother. I had no idea at all that she might be musical. All I knew is that she had a sweet and gentle nature, and she smiled most of the time when she wasn’t laughing. In the short years I had known her a brother had died at his own hands and her baby was born with Downs Syndrome. She bore these pains in the mysterious way that some women have of growing stronger and more loving with each added burden. Then one day she said she had joined a band, and I knew I’d have to go and pretend to listen and think of some compliment for her. I hoped it wouldn’t be too awful, so I could flatter her without blatantly lying.

First the drummer showed up, leaning way too far over the shoulder of Tequila Girl, taking a long time ordering a glass of water, sneaking a peak down her front. I shot him a little happy talk about his playing. Musicians always believe you when you say it sounds good. They have to. They’re doing it to sound good. I found out that the band had been around, in various lineups, for at least fifteen years. So they should have been under no illusions about what they were doing and where they were going. They were already there, this little, friendly, happy place. Not a bad life, I thought. Up on the drum riser, keeping time for the comedy below, and sometimes the tragedy.

Tequila Girl took a sip and turned her bar stool around to form a triangle with us. That kept the drummer talking, maybe the half that was lies. All the places he’d worked, the people he knew, the incredible versatility of his band. He told us they could – and would – play anything, but he stumbled when trying to think of titles, eventually coming up with “Crazy,” the Willie Nelson song immortalized in 1961 by Patsy Cline. This was good enough for me, and I said so. Tequila Girl agreed that it was an excellent choice.

“You wanna hear that one?” he said, as if I had anxiously requested it. “We’ll play it for you, first thing.”

I hadn’t exactly made a formal request, but at that moment there was nothing to do but thank the man for his generosity. Since they were going to play it, I hoped my friend Peggy would be up to the task of singing it. Before I could get up to go look for her, one of the sax players stopped by, mingling with the crowd, like all good small club bands. She was a fiftyish matron in stage threads, her fine, freckled bosom proudly preceding her. She was wearing some kind of stiff satiny evening gown in gold, looking, like all stage finery, a little tawdry in the closeups. She wanted to know how it sounded. Was it too loud? Could we hear all the instruments? I had no idea, but I murmered reassurances. She gave me a look of appraisal. Maybe I passed, maybe I didn’t. We flirted without conviction for a minute before she wandered off. Before I knew it, the break was over, and I missed my chance to let Peggy know I was there for her.

I could see the drummer talking to Peggy and pointing me out at the bar, and while everyone was getting set up and tuned up, she came over to me. She was a somewhat changed Peggy. She had lost some Mommy fat since I’d last seen her, and she had a wholesome Doris Day-sexiness going on, like you’d never talk dirty to her, but if you did she’d wink and know just what you meant. She was wearing a filmy top that you couldn’t really see through, but it looked like maybe you could, and white denim pants that started out tight and then loosened up a little around her thigh, ending about half way down her calves, which were wrapped in festive ribbons from her high-heeled sandals. She was surprised and happy to see a familiar face, and she couldn’t believe I wanted to hear “Crazy.” I continued to act as if I’d requested it – it was too late to back out now.

They didn’t start with my request. They were experienced, and they knew enough not to open a set with a tearjerker. Instead, the bass player sang an upbeat old Motown hit. Peggy looked comfortable singing backup, not at all the fifth wheel some singers become when they’re not the center of attention. Her body – which I had never even thought of before – was moving almost imperceptibly with the music, her feet making a miniature dance pattern that caused a sensuous swaying of the rump. She was totally tuned in and not faking, and I appreciated the way the music turned her on.

In my mental movie of this scene, the revelers have hit the dance floor, and the Motown song ends with shouts and applause. Then the lights dim and a pin spot hits Peggy, making an angelic halo out of her blonde hair. As the first bars of her song play, she introduces it and calls everyone’s attention to me as the one who asked for it. I’m embarrassed only for a moment, before she begins to sing. It is a slower, jazzier version than Patsy’s original, and it is astonishing. There is a rush of recognition as she sings the first word, Crazy… then spellbound silence as she continues. Her voice is a sweet contralto, a little husky, with no affectation, no phony curlycues.

Crazy for feelin’ so lonely… Every note is nailed, every word drenched in real emotion. I knew you’d love me as long as you wanted, and then someday you’d leave me for somebody new… She is not copying anything she’s heard before, and I am amazed at the power she wields so calmly. She is in complete command by the time she gets to the bridge. Worry, why do I let myself worry? Wonderin’ what in the world did I do? She is motionless, in a trance as she performs this little miracle, and each of us in the room is alone with her. I realize I am holding my breath. Crazy for tryin’, crazy for cryin’, and I’m crazy… for lovin’…you.

For three minutes the chatter has stopped, the lies are on hold, there is no bullshit in the bar. What might have happened is happening. Breathless and in love, we erupt in applause and whistles, all the men and half the women.

I will be gone before the set is over. Peggy won’t need me to tell her she “sounded good.” She knows.

On the drive home I reflect on the hidden talent that exists, the myriad abilities that might never be exposed, the beauty that we may never see or hear or feel because we don’t give ourselves the chance, and the unbelievably high cost of a single shot of Patron.

Update, 8 AM next morning: I fixed the link to the song.