My back yard, in fact my entire neighborhood, is alive with springtime. 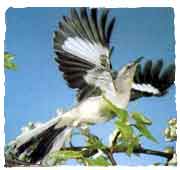 Trees which have been bare for months are undergoing their annual rebirth, sprouting the sweetest bright green leaves. Feral tomcats are feeling amorous and serenading the domestic females up and down the block. The asphalt skateboarders are out in force, methodically practicing the same tricks over and over, pressing daylight hours to the very limit and daring passing motorists to run them down. These surly boys were just toddlers last fall, weren’t they?

Now that Daylight Time has gone into effect, I hear the many nesting birds outside my bedroom window, chattering excitedly while I am trying to stretch my all-too-short nights’ sleep a few more minutes. This morning I heard a couple of starlings going at it over location, location, location.

She: There’s a cat in this yard. I just don’t feel good about building here.

He: I’m telling you, honey, I’ve checked it out, and the lady across the alley throws birdseed out every day. We’ll build the nest in a tree. No cat can catch us, and we’ll have free food. What could be better?

She: That’s what you said last year about the eaves of that Mexican restaurant. Free tortilla chips, you said! But you didn’t think about the busboy with the BB gun, did you? I still have a pellet in my butt!

He: Nag, nag, nag. I’m the one who has to go get the twigs and the grass and the gum wrappers to bulid this thing, while you just sit here and complain.

She: Complain?! That’s a good one, Mister I-don’t-want-to-sit-on-those-eggs! I ask one little favor and you act like you can’t be bothered.

He: You have no idea how hard it is to find worms in this town. You’d think grass seed would be good enough for you, and the occasional crust of bread, but no, not for The Princess. I fry my feathers flying all over the place looking for extra special treats for you, and all I want when I come back to the nest is a little appreciation —

She: — Appreciate THIS, Mr. Big Shot! YOU stay here all day guarding the eggs and watching for that damned cat, and I’ll cruise around town, wasting time with my NO-GOOD FRIENDS!

He: You leave my friends out of this.

She: I’d like to. If you spent half the time here taking care of things as you do out on the telephone wire by the pool hall — get away from me!

So goes the circle of life in the trees. But a more alarming conversation seems to be getting underway in the back yard – that between Molly the Cat and a couple of mockingbirds who may be moving in.

Last spring, mockingbirds built a nest somewhere in our vicinity – we never found the damned thing – and proceeded to claim as their own the entire region in the name of the Mockingbird King and all of Mockingbirdland. They perched on various trees, on wires, on rooftops and weathervanes, and every time they saw Molly the Cat they attacked.

At first, the attacks were verbal. Scurrilous they were, but as I told Molly the Cat, words will never hurt you. Upon spotting the cat, one of the birds would fly down from God knows where to the nearest perch that was out of reach and issue the first warning, a one-syllable epithet that sounded an awful lot like the word “SHIT!” all the while giving M the C the old mockingbird stinkeye. “SHIT!” they would shout, followed by a low-pitched, scary call reminiscent of an angry old man saying “crap,” but drawing it out real long for effect: “Craaaaaaaaap. Cra-a-a-a-a-a-a-a-a-a-a-a-a-a-p!”

The verbal attacks went on for several weeks. Molly the Cat started to develop a nervous tick, and she would never go outside without standing in the doorway for a minute or so, staring out in fear.

I did some pissed-off bird research, and I discovered that mockingbirds are known not only as beautiful singers, but they have an uncanny ability to learn the songs of other birds, that they seem to have an abiding love for music, often staying up late, drinking and singing as many as fifty songs that they have learned, just for the pure joy of learning. And drinking and singing, I assume.

But, ominously, I also learned that mockingbirds are highly territorial, and will go up against almost any animal who ventures near the area they have claimed as their own.

Sure enough, one day I walked out the back door with M. (she had gotten so she wouldn’t go outside without an escort), and I heard a sharp “SHIT!” from the garage roof. Then from next door the other mockingbird came swooping in, while the first one said “Craaaaaaaaap” in that threatening way. While I was distracted by that, the second bird came buzzing down at me, flapping and squawking and missing me by about an arm’s length. Then they both went up to a nearby overhead wire and glared down at us, cursing “SHIT!” and “Cra-a-a-a-a-a-a-p….” Molly the Cat bolted for some bushes, and got buzzed by both birds before she made it to shelter.

This went on for SIX WEEKS, while the mockingbabies were incubated, then hatched, then weaned, making the back yard pretty miserable for me, and totally uninhabitable for Molly the Cat. I don’t mind saying that I was getting pretty exasperated. I went back to my internet research, to see if there was some humane way I could get rid of these little bullies, and that’s when I discovered to my horror that mockingbirds will sometimes raise TWO BROODS IN A ROW in the same location in one season. Sometimes.

Who the fuck do these mockingbirds think they are, anyway? We were here first. We are PAYING for this land, these trees, this house, the very garbage they eat. It got to the point where they would spot Molly the Cat when she was just looking out the window, and yell “SHIT!” at her. She was in counseling until January.

And now it looks like they are back. They must have liked it last year. Maybe I was too gentle. Maybe I was a sucker. Yeah, that’s it. I was a chump. Well, this year – No more Mr. Nice Guy! If they yell “SHIT!” at me…

Who am I kidding? I couldn’t even find their nest last year, and even if I could, I’m probably too soft to take any irrevocable action.

Besides, those little bastrds are badass. SHIT!