Nixon had gone too far. 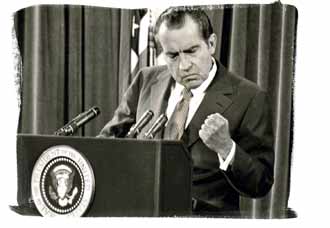 As always when a Republican wins the White House, I was blind-sided. I never expect them to win, no matter what the polls say, because I just can’t believe the electorate can be that willfully stupid. Those who truly benefit from Republican policies are such a tiny minority they could never win any national election on their own. They need big time help from The People, the very people they always stick it to as soon as they get in office. And somehow they manage to get it.

So I was flummoxed when Nixon beat Hubert Humphrey in 1968, with his hunched shoulders and his navy blue suits and his “V” for Victory signs and his “secret plan” to end the war in Vietnam. But I rationalized the defeat by saying that Nixon and Humphrey were two sides of the same coin, that it wouldn’t have made much difference which f*cking representative of The Man got the job. Neither of them excited my young generation the way Gene McCarthy had, and then he was bumped out of the race by the even more romantic and thrilling Bobby Kennedy, who was then murdered on the night it became clear that he would win the nomination.

I was demoralized by all this, the backstabbing and the Chicago riots and the assassination and the backroom deals and the business as usual and Nixon seemed like the president we deserved. I had cast my vote that year, my first ever, for Eldridge Cleaver, who was actually on the ballot in California, so to hell with the Establishment.

But when George McGovern, a pencil-striped buttoned-down straight-arrow senator from South Dakota, stepped up to challenge Nixon in ’72, running almost entirely as an anti-war candidate, the “youth vote” was again electrified. By that time we were fed up with the war and the draft and the utter callousness of “our” government, and we were ready to mobilize to work for change. We were the baby boomers now of voting age in our first full-on battle with The Power. We were spoiled and spoiling for a fight, and we knew we couldn’t lose.

We couldn’t believe our good fortune — here was a mainstream Democrat and he wanted to end the war! He didn’t exactly speak our language, but he was a decent man and he wanted to end the war. What’s more, his people had infiltrated the party machinery from the grass roots and created the state-by-state primary season that we know today, a move that made it highly unlikely that anyone but George might win the nomination.

We joined the campaign, we hit the streets, we went door-to-door. We had the numbers, we had the energy and by God we had Truth and Righteousness on our side. And we were blindsided.

Nixon had wanted to be president at least since 1952, when Eisenhower picked him as his running mate. After twenty years he was willing to do whatever it took to keep the job. The Committee to Re-elect the President, known to us as CREEP, through old-style scorched-earth politics, dirty tricks and flat out illegal activity (can you say “Watergate”?) handed us and poor George McGovern our collective ass. We lost by an Electoral College margin of 520 to 17, carrying only the state of Massachusetts, bless their hearts. We weren’t just defeated, but humiliated, and worse, everyone knew Nixon had cheated!

Next Time: A plan takes shape.