Remember when we kidnapped the President?

George Bush is an insufferable, smirking twerp, of course. His time in office has brought shame to our country, damaged the environment, staggered the middle class, looted the treasury, weakened our constitutional protections and killed hundreds of thousands of people on the other side of the world. These facts are not arguable, except by a tiny number of wild-eyed dittoeheads. Those in power — Bush’s handlers — are too smart even to pretend otherwise.

But before George II and his father, before the smooth-talking Bill Clinton, before that senile wholly-owned-subsidiary-of-General-Electric Ronald Reagan, in the days before most of you were born, there arose from the boneyard of washed-up, burned out, tossed aside and left-for-dead politicians perhaps the craziest dude ever to claw his way into the Oval Office: Richard Milhous Nixon. 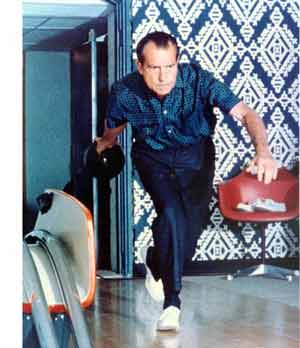 Nixon’s fear-mongering, pandering, smearing, hypocritical Congessional campaigns in California after World War Two are the templates for Lee Atwater’s and Karl Rove’s, the “architects” of all the Bush victories, both father and son. In order to win, Nixon simply tried to destroy his opponent personally. Sound familiar?

He tried to disguise it with his safe blue suits and double-V-for victory arm signals, but his soul was tainted with a streak of craziness. It slipped out one day after Pat Brown (Jerry’s dad) kicked his ass in the 1962 California governor’s race. Nixon was convinced the press hated him and treated him unfairly, and in a famous rant told them that they were going to be sorry, because they “wouldn’t have Dick Nixon to kick around anymore.” Good riddance, but it was not to be.

First John Kennedy went and got himself killed, taking a popular Democratic president out of the running. Then LBJ chickened out of the ’68 campaign, Bobby Kennedy had to drop out to spend more time underground, and next thing you knew, all the Democrats could think of was Hubert Humphrey. Nixon beat him by less than 1% of the popular vote, and suddenly, we did have him to kick around again — only now he was rested, ready, and The President.

Make no mistake — today’s neocons would see Nixon as a liberal. He went and talked to the commies in the USSR and China, negotiated nuclear test bans, started the Environmental Protection Agency, even appeared on “Laugh-In.” He’d probably be to the left of Hillary.

But there were millions of angry, disillusioned hippies, yippies and assorted radicals abroad in the streets of America. The Protest Train was in full runaway mode, and even though some of us had forgotten exactly why, we knew in our hearts that The Establishment was the enemy, no matter the problem. We were determined to pin our outrage on someone, preferably the smug face of The Man. Nixon.

My roommate, Scott, and I were beside ourselves every day. Each evening there he would be on the nightly news, making pronouncements, ignoring reality, shifty, sneaky, fucking entitled. Our marijuana intake, never conservative, ballooned out of control. We were going through a lid a week, just trying to make Tricky Dick, whom we saw as the embodiment of all that was wrong in the world, go away. What had we accomplished with our sit-ins, our marches, our activism, our Revolutionary Brotherhood, if this man could be the boss of us?

Next time: Something must be done.