Right from the start Nixon was a pain in the butt. 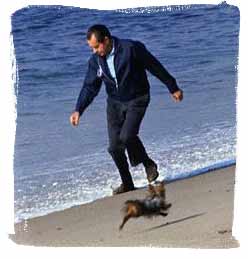 To begin with, Rick, the friend we had enlisted to help us kidnap him wanted us to help. Well, all he really wanted was for me or Scott to drive one of our cars. “I can’t put him in the Jag,” he told us, on the night of the snatch. “If he sits in the passenger seat I’ll never get past the checkpoint at San Onofre.”

I had thought Rick had a Special Ops background. That’s what he always implied when we were drinking after volleyball and that’s why we’d asked him to help us kidnap the president. It never occurred to me that he wouldn’t have a decent car for the job. I pictured the silver XKE rolling up to the Customs stop, the President jauntily unconscious or blindfolded in the right-hand bucket seat. “So stick him in the trunk,” I said. I was already starting to regret this whole idea.

“He’ll suffocate in there. Anyway, he’s the President. It’s not dignified.”

Our plans for Nixon didn’t involve him keeping his dignity. Nonetheless, we didn’t want to kill him. Agnew was still Vice President at the time and giving every indication that he’d be worse than Tricky Dick himself. In the end I agreed to be the wheel man in my ’64 VW microbus. It was completely stock, with no hippie artwork on the outside and no McGovern bumper stickers, so we figured it wouldn’t get too hairy with the military types at the checkpoint.

I’m sorry I can’t tell you exactly how we pulled off the actual kidnapping. I wish I could say that it was a daring daylight raid on the San Clemente compound, involving helicopters and automatic weapons and a daring escape. In fact all I did was drive the VW down Interstate 5 to the beach at San Clemente, and park on a side road around sunset. Rick, Scott and I synchronized our watches, which is not as easy as it looks in the movies, and then Rick stepped out of the bus. We were near enough to the ocean to hear the breakers.

“This shouldn’t take long. If I’m not back in an hour, leave without me. You won’t see me for a while, but I’ll get in touch when I can.” Before we had a chance to register our discomfort with these extremely vague instructions he disappeared into the brush and and down the steep embankment, heading toward the sound of the surf.

Nixon had been famously photographed walking on the beach, trying to show the voters that he was not a stuffed shirt, which, of course, is what he was. But he wanted to be seen as a man of the people, a guy who likes sunsets, cute puppies and wet sand between his toes. Unfortunately he blew it by walking on the beach while wearing a dark blue suit, complete with white shirt and necktie, thus confirming our suspicions that he was a total phony who could not be trusted.

Maybe he was out on the beach that evening trying to get it right, practicing his “casual look” for the next photo session. Or maybe he really did like long walks on the beach. The world will never know, but at least I can confirm that he was out there on that beach that night, and that Presidential security has been tightened a lot since those days.

We sat in the VW bus for a half hour listening to AM radio and looking at our watches. It was not a good time for music on the radio. We heard “American Pie” by Don Mclean, “Candy Man” by Sammy Davis, Jr. and Gilbert O’Sillivan’s pukey “Alone Again, Naturally.” Roberta Flack came on, and she was about to sing “The First Time Ever I Saw Your Face” when we heard shouting in the distance. We killed the radio and craned our necks toward the beach to see what the ruckus was. In a moment Rick emerged clambering over the top of the embankment, dragging himself up with his left hand.

With his right hand he had an iron grip on the blue-coated upper arm of a struggling figure, cursing violently and trying to pull away. Scott and I got out of the van and watched in disbelief. Rick was not a big man, but his commando training or whatever it was gave him the edge in this tug of war, and in a minute we were standing there in the fading sunlight, face to unshaven face with The President of the United States, the Honorable Richard M. Nixon.

“What’re you guys,” he growled. “Communists?”