From today, my little Buddy lives only in my heart. 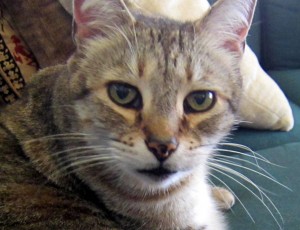 We were together for ten years. He saw me through good times and bad. He wasn’t a cuddler, but he always wanted to be near me. Wherever I settled — in the house, in the studio, on the patio — he’d watch me for a few minutes, then mosey over and lie down a few feet away. In time, I wanted to be near him, too, and I welcomed his gentle presence at my feet, or on the coffee table in front of me, or squeezing himself into a tiny space on my desk as I typed.

But he developed a mysterious condition around his eye, causing it to bulge. Two veterinarians were unable to pinpoint exactly what it was, but it was most likely a tumor. Neither doctor gave us much hope. There was talk of MRIs, CAT-scans, and surgery to remove the eye. Everything cost a lot, and nothing was certain to fix him. I watched helplessly while the condition grew to the point where he and I and Mrs. Jones couldn’t stand it anymore.

I’m not embarrassed to say that I cried. Now I’m wondering when I will stop checking at the back screen door to see if he’s waiting there for me to let him in.

PS: Here’s the story of Buddy, from back in the days when he was called “Tigger.” Shortly after the story was posted, he became Buddy and moved in with us.