Kids, when you grow up and buy radio stations, as I’m sure you will, 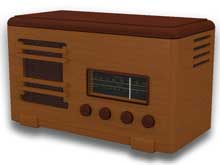 whatever you do don’t let a computer program your Christmas music! I mean this, kids. Computers are have no clue how to do this right. They will play the same title back to back, several times a day, and they will think it’s OK because the recordings are by two different artists. They will not, as a good human program director would, warn you when you have limited the play list to too few songs. For example, thirty songs. Or thirty tracks, because really there are only twenty songs but some of them are by two different artists. And because of their diligent adherence to your wrong-headed choice of only thirty tracks, they will cause your on-air talent to become surly on the telephone, knowing that, even though it is the holiday season, they cannot fulfill your innocent holiday music requests, unless you happen to be requesting one of the songs on the stupidly abbreviated playlist, but why would anyone do that, since those songs are already playing incessantly?

I’ve been listening to a radio station in Los Angeles (KOST 103.5 FM, if you must know) that is playing nothing but Christmas music throughout the holidays. At first the orgy of sentiment was satisfying and fun – cheerful, uplifting holiday songs playing in the background while I worked, picked persimmons, did the dishes, drove around in the car. Good times, really. Gradually, the music faded from my consciousness, and my life was simply imbued with the warmth of the holiday season, as if a chipper and loving Victorian angel were riding on my shoulder, whispering words of acceptance and good will in my ear.

But, as with all stories of this type, soon I detected trouble in paradise. A nagging irritation began bubbling to the surface of my mostly empty mind. It was Burl Ives singing Have a Holly, Jolly Christmas, like twenty times a day. Are there not enough Christmas songs? Do they have to play this one more than, say, once a year? Apparently, computer says “Yes!”

Not only that, but once I became aware of the repetition I started to hear a lot of it, and I mean a lot of it, including the maudlin Christmas Shoes by Newsong. I think the computer is fucking this up, for me and everyone who likes music. KOST is owned by Clear Channel, a corporation which owns 1200 radio stations around the country. You think it’s a bit of a challenge to make a mix tape for your girlfriend/boyfriend? Try programming 1200 radio stations with 24/7 music. I’m not saying this is a good idea, I’m just saying that they couldn’t do it without computers. Probably Steve Jobs should get involved and donate some of those super-creative Apple computers with i-Tunes connections and “golden ears,” because those big Unix mainframes, the ones Clear Channel must be using, are just not hip enough.

So I’m back to my CD’s. I have a friend with whom I have been exchanging cheap Christmas CD’s for ten years now. The rules are: one CD per year, bought at a grocery store or a pharmacy, and costing less than five bucks. I give her one, she gives me one, every year. Sometimes we break the one-disk rule when we find some really cheap CD’s, like in January (then we buy a few and hold them until the following Christmas – can’t give Christmas music in Superbowl season).

In this way I have accumulated…

I’m still looking for The Beach Boys Christmas Album and Phil Spector’s Christmas (mono version). I have them on vinyl, and they’re all scratched from frequent rum- and egg nog-fueled playings and shufflings, plus they don’t work in the mp3 player. Not hearing these two classics is making me contemplate holiday self-mutilation, so please help. If you have one or both of these CD’s, for God’s sake burn me a copy! I’ll swap you my Drug Emporium compilation.

As always at Christmas time, my heart throbs with holiday good will for each of you.

14 Replies to “Round and Round for the Holidays”