Behold the grandeur that is the Melitta ME10TDS Digital Coffeemaker! 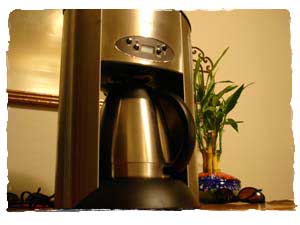 Sensuous brushed aluminum surfaces. Stainless steel thermal carafe. Imposing. Important. Taller than a runway model. A coffeemaker that tells your friends “This is the coffeemaker of an imposing, important man, who doesn’t have time to brew a pot of the best-tasting coffee in the world when he wakes up to begin his important day, so I, the Melitta ME10TDS Digital Coffeemaker, will wait all night and then start myself up and brew his coffee automatically, five minutes before reveille, like only the very best wives would do.”

This was the promise. OK, I admit I was seduced by her looks. I mean, look at her. She’s gorgeous. From the first minute I saw her, I wanted her. I knew she would be high maintenance, but I thought we could work things out. And let me tell you, the honeymoon was rockin’! I thought the buzz would never end.

But the problems started after only a couple of months. First she stopped brewing coffee automatically in the mornings. I took over myself, and did it manually. She became lazy and her appearance went to hell. Eventually, she even refused to make a full pot of coffee. As I told you in this post, she would make a few cups and then stop without telling me. I’d have to start her up again manually, only to have her quit on me again after a couple more cups. The coffee tasted bad, as the grounds were drying out several times during the process. Eventually we weren’t making beautiful coffee together at all.

I couldn’t help myself. A new coffeemaker caught my eye. Shorter and plainer. No grandiose promises, but practical-looking, and no nonsense. This one, I thought, might be one I can live with. Maybe, I thought, we can build something together. Melitta had already checked out, and so I brought this new one home. I’m happy to report the coffee is once again fantastic. This one, a Cuisinart, says she will make coffee automatically in the morning, but I have decided against it. I’ll carry my own weight around here from now on, and perhaps there will be less bitterness in this new relationship.

The Melitta ME10TDS Digital Coffeemaker? Last time I saw her she was hanging out with the garbage cans in the alley, the trollop. 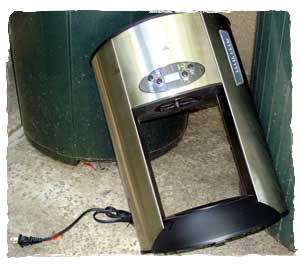 14 Replies to “Shake Your Coffee Maker”