I had a bouffant hairdo. I wore teardrop-shaped black framed eyeglasses, a plaid pleated skirt and knee socks, and when I saw The Beatles on stage at The Ed Sullivan Show, I was transfixed and transformed. 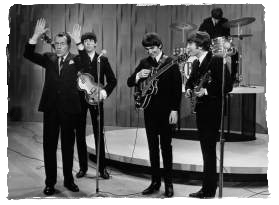 No, I am not transgendered. I just saw a DVD of The Ed Sullivan Show from February of 1964 and September of 1965. This is my way of saying that finally, after forty years, I really saw what those screaming girls saw on those nights.

For three consecutive Sundays in February, Ed presented The Beatles in live stage performances of their earliest hit songs: “I Saw Her Standing There,” “I Want to Hold Your Hand,” Please Please Me,” “Twist and Shout,” and more. The studio audience was made up of hundreds of teenage girls who, at least for those moments, became part of history. For they saw the future in this odd-looking band, and they responded to it so viscerally that America was shocked, and their boyfriends angered and jealous.

I, a musician, didn’t see it. The vocal mix was bad. Their hair was completely out of line. Their pants were too tight. They wore faggy high-heeled boots! None of that mattered. What I didn’t see was the immense talent — songwriting, arranging, singing, playing — but more than that, I failed to see the magic.

Magic doesn’t happen very often, and if you’re an analytical type like I am, and uncomfortable with change as I used to be, sometimes it goes right over your head. The girls in the theater and all over America on those nights were ready for magic, ready to see it and feel it. They screamed, they wept, they held their faces in their hands, they were spellbound. Their reaction looked sexual, and no doubt on some level it was. But really they were reacting to being touched, deep in their souls, in a direct, truthful, fun way that had — dare I say it? — never happened before. The world was changing, and these girls were among the first to notice.

Of course I came to realize that The Beatles were special. Like many millions around the world, I became a huge fan. But this evening, watching this primitive black and white television show, shot with cameras that had vacuum tubes, for God’s sake, I felt the magic, and it nearly drove me to tears. Hey, I have admitted here that I am somewhat in touch with my feminine side. Deal. Watching these performances, I was touched by the magic. I was joyous like a kid, like the kid who watched these shows live forty years ago, only this time I got it.

If you love pop music, and you want to see some roots, get this DVD, and maybe you’ll get it, too.

5 Replies to “She Was Just Seventeen”