I watched the opening ceremony of the Beijing Olympics last night. 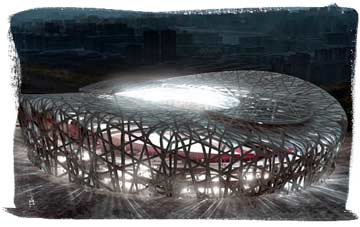 I probably shouldn’t have.Â I should have boycotted it, what with the bad human rights record the Chinese have and all, and the way they treat the Dalai Lama.Â I mean, it’s a repressive regime, no getting around it.Â Our president didn’t mind too much, though.Â He was there in the front row, to see and be seen.Â But then Bush seems comfortable with doing the bidding of others, as long as there’s profit in it for his family and friends.Â The Chinese own so much of the U.S. that Bush might not have had a choice in the matter anyway.Â What do I know?

But talk about keeping order!Â The new Olympic Stadium, called “the bird’s nest” over and over again by commentator Matt Lauer, was filled with 91,000 spectators, and the government thoughtfully provided 130,000 cops at the venue, probably to give directions and retrieve lost children and stuff.Â Oddly, no fights broke out.

I’m already sick of the Olympics, because I watch The Today Show every morning as I’m trying to start my day, and NBC — by virtue of a billion-dollar payoff to the Chinese Olympic Committee — is the exclusive purveyor of all things Olympian to the U.S. television market.Â They started months ago with a daily “Countdown to Beijing.”Â Daily.

Every morning they interviewed some jock or other, and showed an inspiring video about their struggle to be the best.Â Then Ann Curry or Meredith Viera would put on a fencing suit or a pair of shorts and engage in a little swordplay or maybe some beach tennis (yes, it’s just like beach volleyball, only not) out on the street in front of 30 Rock, all in fun, until somebody fell down, and then “…this is Today, on NBC,” and cut to that glorious trumpet fanfare they’ve been using on NBC since the LA games in 1984.Â Three months of this.Â I don’t care to see the games, since they no longer include team handball.

But that opening ceremony – whoa!Â Fifteen thousand performers.Â An LED video screen 400 feet long, that you can dance on!Â An epic pageant, displaying the history of a culture that is thousands of years old.Â Who even knows when they started?Â But I can tell you this: the Chinese invented paper and movable type.Â They invented the magnetic compass.Â They invented gunpowder, and the subsequent stuffing of it into rockets.Â So they were able to sail safely to far off lands, shoot the bejeesus out of the natives, find their way back, and write it all up in the Sunday papers.

And what did we learn from the scene where a thousand or so invisible Chinese carried a dance floor the size of a basketball court around on their shoulders while a solitary woman danced evocatively on top of it?Â That the glory of any achievement is possible only through the anonymous labors of many, many faceless laborers.Â And what lesson from the part where the beautiful children carry the flag around the floor of the stadium (excuse me, the bird’s nest), smiling and waving, only to have it snatched officiously by uniformed soldiers and run up the pole, where artificial breezes unfurled it only at the very top?Â That children may be the future, but it is The State that will protect and defend that future.Â Out of the way, kids!

I really only watched to see the fireworks, and I have to say they were not disappointing.Â At one point early on, the entire city of Beijing was used as a stage, as footprint-shaped explosions took place in the sky, 29 of them, symbolizing the 29 Olympiads of the modern era, each one a half-mile apart, pefrectly synchronized and marching to the bird’s nest.Â Holy shit, you’d never get the permits to do that across all the districts and municipalities of Los Angeles.Â And once the show started, there haven’t been so many rockets in the air since Bush took Bagdhad.Â I mean, it wasn’t launch-boom! launch-boom! launch-boom!Â It was more like the sky was on fire.Â It’s amazing the kind of fireworks you can buy for a billion dollars.

I surrender.Â There is no way to stop the Chinese.Â They are alien (like, totally!), they are many, they are ancient, they are modern, they are clearly superior.Â Learn the language, folks.Â This will be the Chinese Millennium.

11 Replies to “The Chinese Millennium”