In the beginning there was dirt.

And the dirt was good. So good that a little tree sprouted out of it, God knows where the seed came from. Birds, probably.

Then came sun and water and after ten or fifteen years the little tree said “Now I will make some persimmons,” and so it came to pass that in the fall three hundred big, fat, sweet, juicy persimmons hung from the little tree’s branches, until the little tree cried out “Pick these things and eat of them, would you? 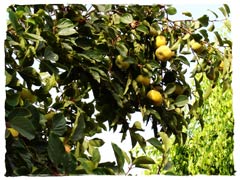 And so a harvest was mounted, and it was bountiful, and there was much climbing of ladders and plucking of ripe persimmons and fending off hungry mockingbirds, and there was joy and shouting in the back yard. Soon the bushels were filled with extravagant fuyus, enormous orbs of orange sweetness to rival the pear and yes, even the exalted papaya. 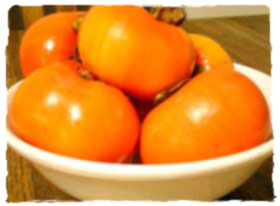 The harvest exceeded our ability to consume. Persimmons were eaten at every meal, pressed upon every friend, and all the relatives and every coworker until each person turned and walked briskly away when they saw us coming with our shopping bags full of fruit.

And still there were more persimmons. And they were starting to get very soft.

And so it came to pass that on that last Sunday in December, four days and four nights after the Solstice, the remaining persimmons were introduced to obscene amounts of sugar, butter, flour and many and varied spices – cinnamon, vanilla, nutmeg – as well as raisins, fresh lemon juice, chopped pecans, and the mixtures and batters were formed into loaves and dropped onto cookie sheets, and the baking, oh, the baking went on throughout that day and into the night, and when it was over and the kitchen was nearly as hot as the fires of hell, behold! The persimmons were transfigured into life-giving sweetbread, and verily I say to you… 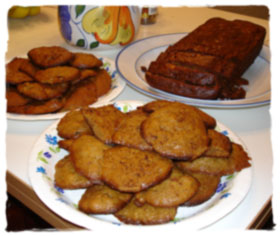 13 Replies to “The Circle of Life”